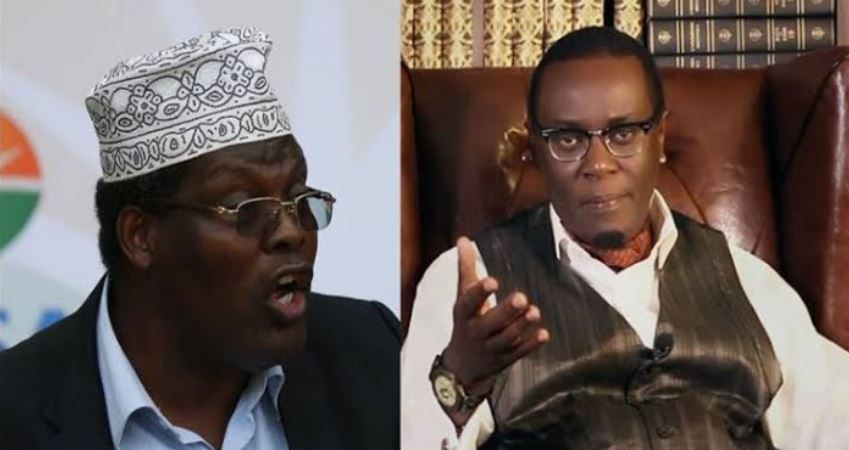 Canada-based lawyer Miguna Miguna has lashed out at Mutahi Ngunyi after the political analyst offered to mentor him.

Taking to Twitter, Mutahi shared a link to a video of his 5th Estate TV YouTube team discrediting Miguna Miguna’s 2012 political memoir ‘Peeling Back the Mask: A Quest for Justice in Kenya’,

According to the 5th Estate panel, the book didn’t deserve the autobiography title as nearly half of it was a rant against Raila Odinga, who Miguna portrays as a selfish, hypocritical and deceptive leader whose greed for power makes him unfit to run for Presidency in Kenya.

The panel of three, mentored by Mutahi Ngunyi, found it ironic that Miguna swore in Raila as the People’s President yet he had declared him unfit to run the country in his book.

Based on the views of the 5th Estate panelists, Mutahi volunteered to mentor Miguna Miguna but did not indicate in what capacity.

“I want to mentor Miguna Miguna and (please Miguna, do not abuse me. Please). I am serious,” he tweeted.

In another Twitter post, Mutahi Ngunyi wrote: “I think @MigunaMiguna has a LOOSE WIRE. And it’s in his TONGUE. Watch how he will RUN his MOUTH after I insist on MENTORING him!!!”

This prompted the self-styled National Resistance Movement (NRM) General to respond slamming the former don at the University of Nairobi.

According to Miguna, Mutahi doesn’t qualify to offer him any mentorship because of the scandals he has been involved in in the past.

“I must disappoint you, Mr. Kleptocrat. You cannot mentor men and women of integrity with stellar records in the struggle for Justice and more qualified and competent than you. You are free to mentor thieves struggling to join Waiguru and you in NYS and other heists, ” said Miguna. 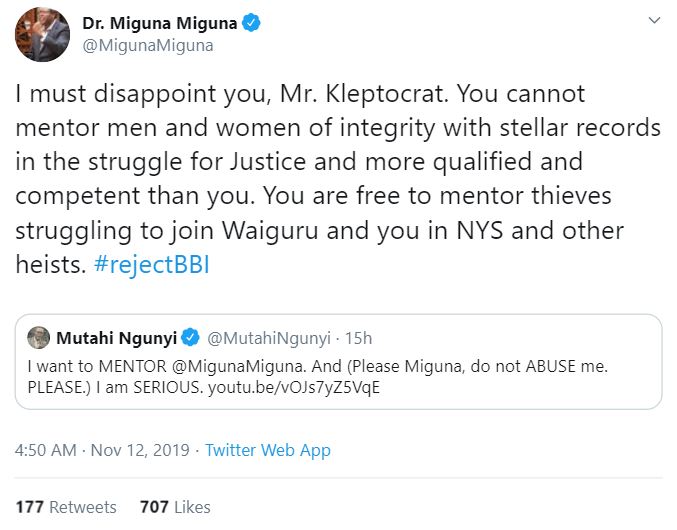 Eeh i was waiting for this now I can sleep in peace LE GENERAL.
Deconstruct them.

You can’t mentor a man of integrity, in fact @Miguna Miguna should be the one mentoring you

FT.
Referee has blown the whistle.
Miguna 3 vs Kleptocrat 0.
😅

Loading...
Diana Marua’s Plea to Men With Wives Battling Postpartum Depression < Previous
Janet Mbugua Can’t Keep Calm After John Cena Followed Her on Twitter Next >
Recommended stories you may like: