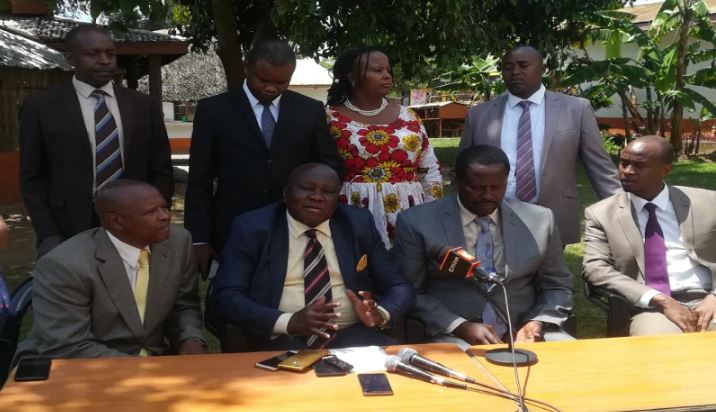 Members of the Machakos County Assembly have jumped to Raila Odinga’s defense over allegations that he uttered derogatory remarks towards Kamba women.

The ODM leader attracted scrutiny over the weekend after thanking the Kamba community for their generosity in a remark that had strong sexual connotations.

On Tuesday, a host of Machakos MCAs convened at a Machakos hotel and urged Kamba voters in Kibra to ignore claims that Raila described women from the community as ‘sexually loose.’

“Those attacking Raila over his remarks are simply seeking cheap political mileage after sensing defeat in Kibra. We are asking Kamba voters in Kibra to ignore them and vote for the ODM candidate,” said Kaloki.

“Obviously they are worried about the political unity by our governors. They are alive to the fact that their leader has no solid political stand to guide the Kamba community,” he added.

The MCAs also declared that the Kamba community was fully in support of governors Kivutha Kibwana, Alfred Mutua and Charity Ngilu in their resolve to work with Raila Odinga. They said the move will benefit Kamba community living in Kibra constituency.

Loading...
“I Came Up With ‘Kumira Kumira’ Jubilee Slogan”- Sacked Kameme Presenter to Uhuru Kenyatta < Previous
Kisii Proves To Be Exam Cheating Hotspot as 11 Are Arrested for Impersonating KCSE Candidates Next >
Recommended stories you may like: