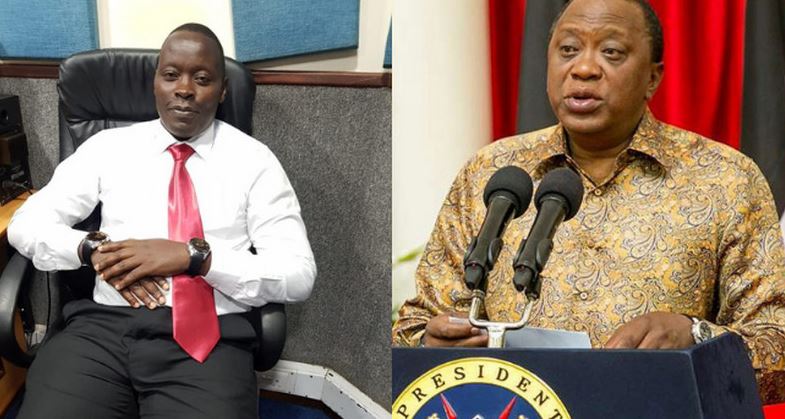 Kikuyu-speaking radio personality Moses Kanyira has penned an open letter addressed to President Uhuru Kenyatta pleading his case after he was sacked at Kameme FM.

While Kanyira started his new job at Mt Kenya FM radio station on the same day he was fired, the presenter alludes that he was unfairly sacked as a result of malicious allegations that he writing negative stories about the Building Bridges Initiative (B.B.I).

To support his claims, Kanyira listed some of the contributions he made to push President Uhuru’s agenda during his 17-year stint at Kameme FM. According to Kanyira, he singlehandedly started the fight against second-generation liquor back in 2015.

Kanyira further told President Kenyatta that he was directly involved in his presidential campaign, and as a matter of fact, he came with the Jubilee slogan ‘Kumira Kumira’.

Below is the Open Letter from Moses Kanyira to President Uhuru Kenyatta.

I take this opportunity to thank you for everything. During my time in Kameme Fm I was directly involved in driving some of your ajendas that affect our people and also drumming support like any other Kenyan who enjoys freedom of choice democratically and constitutionally. On the year 2015, I single-handedly started fight against second-generation liquor which was sweeping generation.

After the campaign against the same gained momentum, you joined the fight with full force and declared the tough fight which shakedown the whole country. As a result, the soberness especially in our youth was realized. During the fight of business of death, I was appointed by media colleagues to be chairman of media fight against the menace.

During that period I was joined by my colleges including the current Kiambu women rep Gathoni wa muchomba,who was working at Kameme fm by then, Maina kangethia Kbc editor in chief, Billy Muiruri who is now working in kajiado county government but by was working with Nation newspaper , and many more who worked wholeheartedly to achieve your directives.

Mr President, as a result, I have passed through a lot of pain in courts concerning the fight to achieve directives, and up to now, one case is still proceeding. In the last two elections, I was directly involved in your campaign and in fact am the one who came up with a slogan”Kumira kumira” which initially was directed to mass voter registration and also to urge Kenyans to vote in large numbers as they are mandated constitutionally.

However, I was finally subjected to ridicule by one of influential person who maliciously claimed that am writing negative stories towards B.B.I, and a day later I was sacked. My president the claim was false and fabricated and only aimed to destroy my reputation and my career. My dear President was it your directives as that person claimed?

I wish you all the best and pledge my loyalty to you. Moses Kanyira, sacked Kameme fm journalist.”

Loading...
Andrew Kibe: I’m Married But I’ve Been Single For Years < Previous
Machakos MCAs Defend Raila Over Kamba Women Remark Next >
Recommended stories you may like: