Why Adoption was the Best Decision I Ever Made 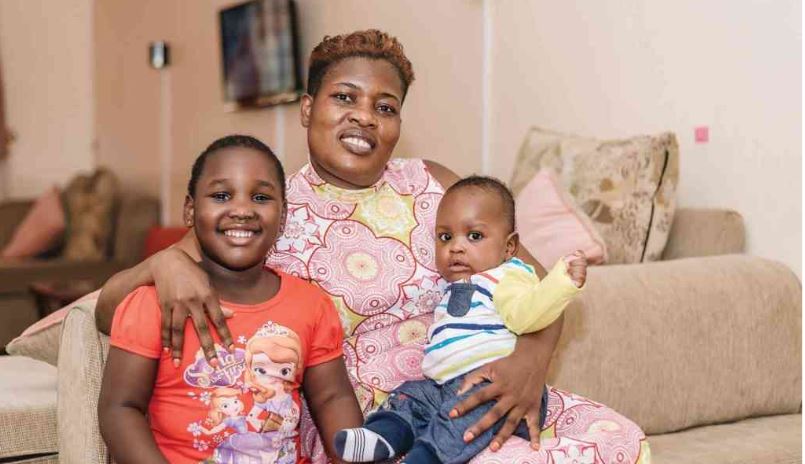 Grace Wanunda is an adoptive mother of two kids who got a kick in the butt to finally adopt from media personality Caroline Mutoko’s experience with adoption.

Wanunda shared her unique journey as a single, adoptive mother with Standard.

It took eight months to be matched with a baby. My baby. The first time I met my daughter, Angel Faraja, was in the end of February 2015. I had been sent a photo of her, taken soon after birth.  But when I went to meet her, she was almost unrecognisable. She was so tiny and frail. I cried my lungs out. What had happened between when she was born and the four months she lived in the institution? She was born at 3.3kg and when I met her at four months, she was weighing only 5 kilogrammes.

The thought of adoption came into mind in 2014. For about five months, I had recurring dreams about helping needy children. I come from a rather humble background and I know what it is like to go hungry, to not have school fees, or have to walk for long distances to school because you couldn’t afford the fare.

But, I had a few niggling concerns. One, I was a single woman. My dream was to find Mr Right and have biological children. The idea of being a single mother, leave alone a single adoptive one, had never even occurred to me. As an ardent church girl, I believed a family ordained by God had a wife and husband united in holy matrimony, and thereafter children as a blessing.

Secondly, I had no knowledge of adoption at all. I didn’t even know how to go about it. I thought adoption was for those who couldn’t have biological offspring. Like many people, I also believed in some harmful myths about adopted children. That they were a bad omen, ungrateful, and social rejects. They would eventually turn against their adoptive parents, no matter how well you’d treated them.

So days passed on, as I struggled with my thoughts. Then one day, while in the salon, getting my beauty treatments, I reached for one of the copies of the magazines and read how Caroline Mutoko, then a renowned media personality, had adopted her daughter. By the time I finished reading the story, I was in tears.

I confessed to my hairdresser that I was interested in adoption and she asked: “Why not?” She told me that one of her regular clients, a psychologist who worked with Little Angels Adoption Society, had adopted and could help me with the process. But I was apprehensive.

Coincidentally, the lady walked into the salon as we were still discussing. Was this a divine sign? I had goosebumps all over my body. I took her number and excused myself. I went to my car and broke down. I cried a river.

I knew God wanted me to adopt. But how could God guide me to be a single mother? How would it look like to other people? I prayed that if this was indeed God’s plan, my mother would fully support me. In the back of my mind, I thought “Surely, my mother would never support such madness.”But when I told her that I was thinking of adoption, the first thing she said was “what are you waiting for?” She told me that if God has put the desire to adopt in me, I shouldn’t question it or waste time consulting people.

I then got in touch with the psychologist and visited Little Angels offices in Mombasa. A social worker explained the adoption process to me and gave me some forms to fill out. I was still struggling with the decision, so it took me two months to fill in the forms. Afterward, the social worker came to inspect my home. I was also counseled on what to expect by a trained psychologist.

Angel was in an institution in Western Kenya while I was in Mombasa. I brought her home in March 2015. I had to take leave from work to bond with her. The first month was full of anxiety.  I was a clueless first-time mother. I had never handled a baby and I didn’t have a nanny. But I was determined to take care of this little angel God had placed in my life. I had a supportive friend who held my hand through it all. I would take care of the baby during the day, and she would help out at night.

My sleeping patterns changed. I couldn’t sleep although Angel, being a sleep-trained four-month-old, slept through the night. I would wake up to just check if she was breathing.

My efforts paid off. After one month or so, the transformation was mind-blowing.  My baby added 2 kilogrammes! Her face had filled out and she was glowing! My heart was full. I felt that this is exactly what God had called me to do. Why hadn’t I done this earlier? The feeling was simply out of this world.

Everyone in my circle, both family and friends, fell in love with my daughter. I became Mama Angel to everyone, even in the office. To date, everyone talks about her bold personality. She is simply irresistible. But some church members were shocked that I had decided to adopt. But did I care? I was confident that God had guided me to adopt Angel.

Was my dating life affected? On the contrary, it got better. Before I had Angel, I was a no-nonsense lady who might have come off as unapproachable to potential suitors. My life revolved around work, church, and home. For a long time, I didn’t have any dates.

Adoption made me so happy that the beauty inside shone through. I started getting more invitations, although I was more careful about whom to date. I had to put my daughter’s best interests first. I raised my benchmark. I would not date anyone who wasn’t willing to love her like his own.

In 2018, I adopted a second child, a baby boy this time. The transformation I had witnessed in my daughter had inspired me to adopt a little brother for her. I was more knowledgeable about adoption, so the process was a lot smoother. I was also very active in the adoption community. From application to placement, it took only two months. My experience mothering Angel also came in handy. I no longer panicked at every little cough or hiccup.Additionally, I had the support of a good nanny and my daughter. She adores her little brother. Today, Angel is a very happy five-year- old. My son, Timothy Jabali is now one-year nine months old.  I’m so happy and fulfilled to be their mother.

In June 2017, I founded Adoption is Beautiful, an organisation to encourage and help others through the adoption process. Adoption transforms the life of both the child and the parent. I also wanted to show Kenyans that, unlike many falsely believe, adoption is doable. Anyone can adopt, you don’t have to be a celebrity or rich.

I had been through depression and anxiety during my process. The first lawyer I hired conned me Sh 30,000 and prolonged the process. I wished I had had someone to guide me. I chose to become that person for others willing to adopt. I would be there to walk with them, offer comfort and encouragement. The process can be easier with the right knowledge and support.

Through Adoption is Beautiful, I have helped more people than I expected through the adoption process. I’m humbled at the role I have played in settling children with families. We’ve also registered another organisation, Adoptive Association of Kenya (AFAK), of which I’m the chairperson. This is an umbrella body that brings all the parents and adoptees together. It’s currently the most active association for adoptive families in Kenya.

We train adoptive parents on self-representation in court in case they’re unable to hire a lawyer, and organise counseling sessions for families on challenges surrounding disclosure. Additionally, we organise family fun days where our children came in and just play together. This shows both adoptive parents and their children that there are many others like them. We have WhatsApp/Telegram groups that help us share our challenges and fears as adoptive families.

Do I plan to get married? Oh, yes! I’m looking forward to that. My two children are not a stumbling block at all. On the contrary, they are a blessing. I am more mature and responsible to have raised two children and given my best to them. This should be a plus to any potential husband. And yes, I’m open to having biological children although I don’t particularly desire to. Adoption taught me that children are children no matter how they come into my life. In fact, I would love to adopt again. My prayer and promise to God is: bless me to be a blessing.

My advice to anyone who is considering adoption is Go for it! Adoption is beautiful.

Loading...
CRAZY: Funny Pics/Memes Going Viral on Kenyan Social Media < Previous
The Trending Images in Nairobi This Monday Next >
Recommended stories you may like: