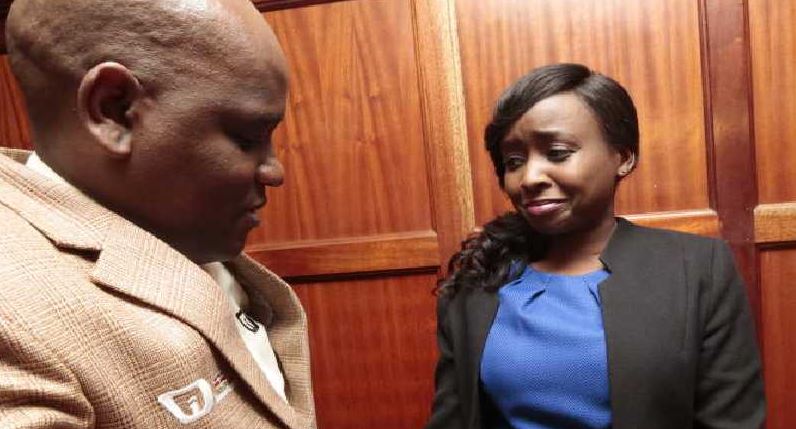 Former Citizen TV news presenter Jacque Maribe has jumped to her defense and that of her best friend Dennis Itumbi over both their Head of State Commendation (HSC).

The two were among notable figures who received the HSC award from President Uhuru Kenyatta in 2017. And as Kenyans marked Mashujaa Day on Sunday, the question of whether Itumbi and Maribe were deserving of the award became a topic of discussion during the former blogger’s interview on the Punchline show on K24.

Maribe, who was seemingly following the discussion hosted by K24 anchor Anne Kiguta, took to social media to assert that their naysayers have no idea how the presidential commendations are awarded.

“My bestie @dennisitumbi is having a convo on K24 Punchline. Question is he and I among others got HSC awards. Problem is people don’t research how these awards are given. Riswa! Tunaelewa! Mungu mbele. Well done sweetie @dennisitumbi. I am, @jacquemaribe HSC,” she wrote.

During the interview, Dennis Itumbi said he deserved the award partly for his push for free Wi-Fi connection around Nakuru town.

He said President Uhuru also recognized him for his idea to introduce social media communication in all government ministries and agencies.

“This (award) was my boss just saying ‘Dennis, well done. The issues (which led to my consideration for this award) were two. One was the attempt to connect Nakuru to free wifi and the second one was introducing a digital infrastructure for government and that was both human and physical,” Itumbi said.

Itumbi continued: “There was a contract with the County Government of Nakuru (about the wifi) then, for two years, the wifi worked in some places and didn’t work in other places. By the way, it was done without using public money so in essence, it was a good attempt.”

My bestie @dennisitumbi is having a convo on K24 Punchline. Question is he and I among others got HSC awards. Problem is people don't research how these awards are given. Riswa! Tunaelewa! Mungu mbele. Well done sweetie @dennisitumbi I am, @jacquemaribe HSC

Loading...
Q&A With Ex-US Ambassador: I Deeply Regret Bombing < Previous
Revealed: Benefits and Privileges of State Commendation Next >
Recommended stories you may like: