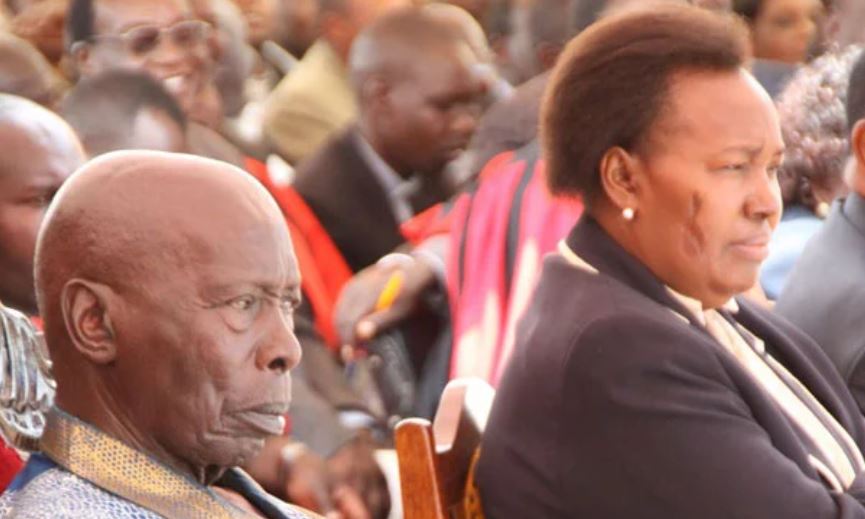 Dr Sally Kosgei was among the most powerful public servant in the Moi regime where she served in various positions before rising to the position of Secretary to the Cabinet and Head of Public Service.

When retired president Mwai Kibaki assumed power, she was expected to be among high profile individuals earmarked for sacking due to their closeness with Moi.

But one month later, she was sacked, becoming the first high-profile government official to be sacked by the Kibaki government.

Dr Kosgei, who served in the Foreign Affairs department for 21 years, spoke about the sack, and more, in an interview with the Sunday Nation. Here are excerpts:

You seem to be having an interest in books…

Yes I do. At one time reading about three to five books. Every month, I buy myself a book. I am currently reading “Uhuru Kenyatta: A Legacy of Democracy and Development” and re-reading Oscar Wilde’s “The Picture of Dorian Gray.”

Which are some of your favourite titles?

There are many but books by Lee Kuan Yew, the first Prime Minister of Singapore are among my favourites. I met him once. His book “From Third World to First: The Singapore Story – 1965-2000” is a great read.

My other favourites include “The Rise and Fall of the Great Powers: Economic Change and Military Conflict from 1500 to 2000” by history professor Paul Kennedy, Russian author Fyodor Dostoevsky’s “Crime and Punishment”, former US President Bill Clinton’s autobiography “My Life” and Nelson Mandela’s “Long Walk to Freedom.”

“Long Walk to Freedom” is an easy book but a very nice read. I also spend a lot of time reading materials in libraries and I am a fan of any matters touching on the political economy.

You seem to have a lot of interest in politics and history.

Politics and history are my study areas. My masters and PhD degrees were on Economic History.

How did you manage to rise to become the most powerful woman in the public service?

First, I don’t like to be grouped as a woman when it comes to my career. I am in the section of those who don’t believe in affirmative action for women. Regardless of my gender, I have always fought for my space.

This explains your touch with history and remembrance of historical details.

I love history and I have a very sharp memory. Interestingly, I have never kept a personal diary. President Moi used to like me because if he failed to remember something, he could always turn to me.

How was it working in the Moi government?

President Moi was in touch with the government and the people. He was so good at running affairs.

In the morning, he held meetings with various officials from the civil service. In the early afternoon hours, he met with security teams and later in the evening, it was time for him to host businesspeople.

He respected the civil service and gave us space to work. He never mixed family matters with the running of government.

Despite working closely with him, I never knew most of his kids and didn’t meet them personally. The President also had a lot of respect for people who went to school.

Despite being our boss, he requested for anything with a lot of humility.

It has been alleged that your rise in the public service is associated with your close relationship with retired President Daniel Moi. Was he your relative or what kind of association did you have with him?

When Moi became president, I was still a student. I personally never knew him and neither was I related to him.

Even when I worked closely with him, we were never friends. It was a civil servant working for her boss.

What would you say about the view at the time that you were sacked after Moi left power because of your tribe? The truth is that after the 2002 election, a number of top ranking officials from the Kalenjin community were fired.

Among the first ones was Zakayo Cheruiyot, myself and military generals. One of them who was the best student in his class at the respected Royal Military Academy Sandhurst was retired and his position taken over by someone who was among the worst performers in the course at the same institution.

Personally, other than being born to Kalenjin parents, I have never considered myself as a Kalenjin.

We grew up at Serem, an area inhabited by Luhyas, Luos and Kalenjins. I grew up speaking and learning all those languages. Most of my primary school teachers were Luos and Luhyas and they thought us in those languages.

How did you overcome the sack?

The good thing is that I was not used to using government resources including official cars for my personal use.

As a civil servant, I preferred to live within my means. My children never used to be driven to school using government vehicles.

I always asked myself, what if I was sacked and the government driver failed to come and take my kids to school?

I didn’t allow myself to be confused with the political class.

And probably if I could not have been sacked, I could never have become a Cabinet minister.

After your firing, there was the talk of dealing with corrupt civil servants who served under Moi. You were dragged to court. How did the matters end?

I was accused of so many things and branded corrupt.

I was harassed and even taken to the Kibera Law Courts.

One of the issues I was accused of was a scandal involving the Kenya Seed Company in which shares of the company were sold despite a government directive halting the transaction. The dealings happened before I was appointed the Head of Public Service.

I went to The Kenya Anti-Corruption Authority (KACA), the predecessor of EACC, 24 times on the matter.

At times, I could sit at the KACA offices from 8 am to 8 pm without being interrogated.

The ordeal was just meant to embarrass and humiliate me.  I remember one day, the interrogator asked me where I was born, which High School I attended and who was my area Chief.

My pension also took a lot of time to be processed.

Is this harassment what prompted you to get into politics?

What got me into politics was the 2005 referendum campaigns which then pitted President Kibaki against his Roads Minister Raila Odinga.

The referendum campaigns led to formation of ODM. In 2007, I vied on an ODM ticket in Aldai Constituency which I won.

After being elected MP, I went on to serve as a minister in the departments of Agriculture and Higher Education, Science and Technology.

When I was the Agriculture minister, we paid maize farmers their dues on time and at no one time did we seek help from the Treasury to import maize to deal with food shortage even when we faced a drought in 2010.

That profile is outstanding for a woman.

That is where people get it wrong. I have fought for my space not as a woman but as any other person.

I am not an affirmative action person. I don’t operate in the women’s corner.

I run a flower firm and eke out a living from giving lectures in a number of universities especially in the East Coast of the US.

I travel to give the lectures at least three times in a year. I have also been to the universities of Oxford, Cambridge, Glasgow and Edinburgh.

But the money I get paid cannot buy you a car.

Loading...
Ken Okoth’s Doppelgänger Speaks Out after Twitter Buzz < Previous
You Don’t Stand a Chance of Becoming President – Atwoli tells DP Ruto Next >
Recommended stories you may like:

The Trending Pics in Nairobi This Thursday
Loading...
The Latest