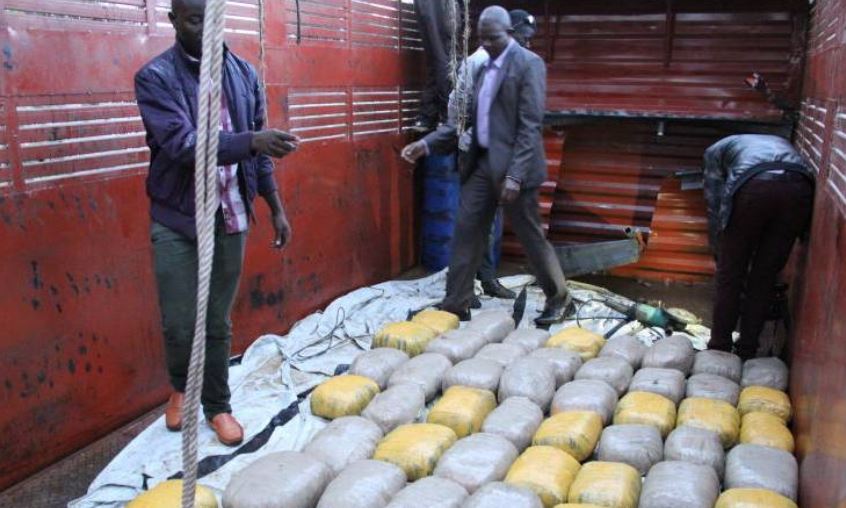 An operation by officers from the Transnational Intelligence Unit based at the Directorate of Criminal Investigations headquarters has netted 139 kilograms of weed with a street value of Sh2.8 million.

Police in Nanyuki on Tuesday intercepted a lorry ferrying the consignment along Nanyuki-Nyeri highway. Laikipia East police boss Kizito Mutoro said the 11-tonne lorry was headed to Nairobi from Moyale in Marsabit County.

Mr Mutoro said the officers from the Transnational Intelligence Unit had been trailing the lorry from Moyale.

“We were tipped off about the truck from Moyale and we found that it had a false extension behind the driver’s cabin where the drugs were put in 62 wrapped polythene papers,” said the officer.

The officers took close to three hours to cut open the extension on the lorry’s body where the drugs had been hidden.

The detectives also arrested three suspects who were detained at Nanyuki Police Station before their arraignment today.

‘This is a large syndicate of drug traffickers and we will seeking for more time from the court to pursue more suspects,” said the police boss.

Mutoro said investigations could go beyond the border to establish the source of drugs, believed to be Ethiopia.

Loading...
New PHOTOS of Tanasha and Diamond’s Newborn Son < Previous
Sarah Wairimu Wants DCI Kinoti, Prosecutor Locked Up for Contempt of Court Next >
Recommended stories you may like: