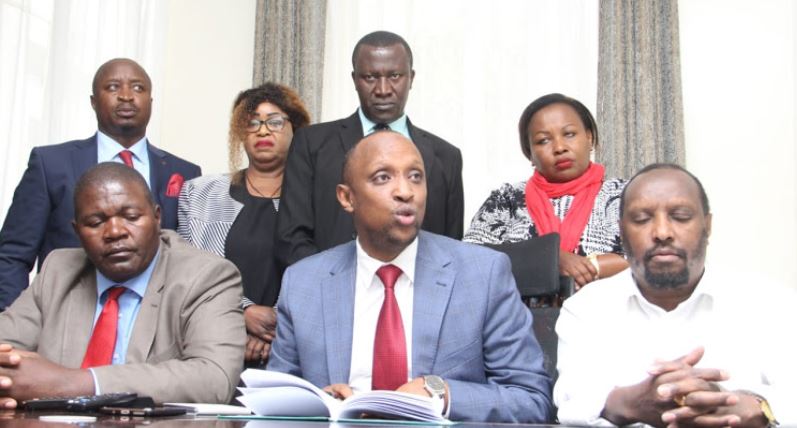 Members of the Nairobi County Assembly led by Majority Leader Abdi Hassan Guyo have dismissed claims of a looming crisis should governor Mike Sonko be charged over graft.

Mr Hassan Guyo on Tuesday said there is no panic at city hall, further noting that Sonko has not been charged.

“Governor Sonko is in office and everything is in order. He has not been charged nor should people pre-empt that he will charged as it has been reported in the media,” he said.

The majority leader said anti-graft agency EACC should be left to conclude the investigations of Sonko’s alleged involvement in the garbage collection scandal and send the file to DPP.

Guyo also rubbished reports that embattled Speaker Beatrice Elachi will take over the Office of the Governor in the event Sonko is forced to step aside.

“Elachi was impeached by the assembly of Nairobi and she is no longer our speaker and therefore she cannot take over. I don’t know what narrative is being interpreted outside and which Constitution is being used,”Guyo said.

Adding: “The Kenya constitution is very clear under Article 182 on when the Office of the Governor is vacant and so far none of the reasons has been met.”

“We have our speaker Chege Mwaura who is the leader of the assembly courtesy of the county government Act Section 10 subsection IV and Elachi is nowhere in terms of assembly leadership and in terms of taking office.”

The leader of majority additionally asserted that Sonko is not leaving the governor’s office anytime soon until the 2022 elections when Nairobi residents will judge him by his achievements.

“As far as we are concerned all that is being reported are allegations and the media should let EACC do its work,” he said.