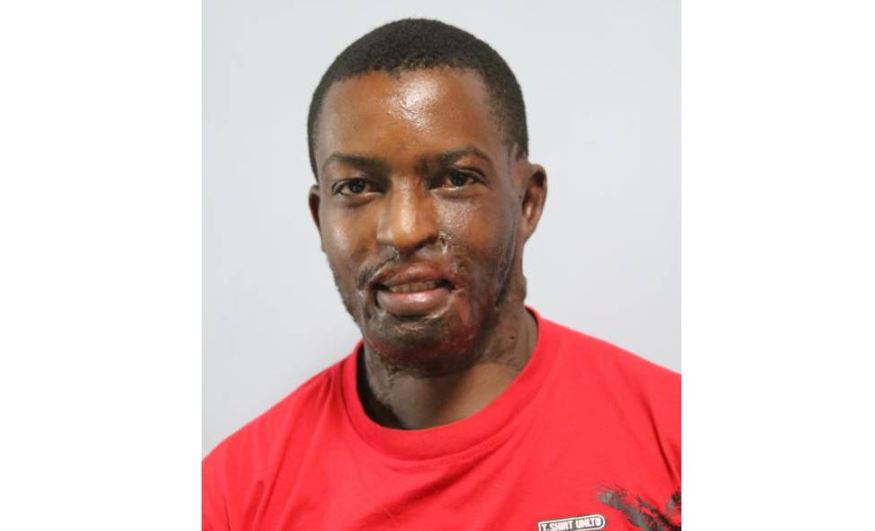 Kelvin Kairu Nyambura is a victim of a gruesome acid attack by a stranger on March 2019 that left him physically and mentally scarred and drove him to attempt suicide twice.

In an interview with Sunday Magazine, Mr Kairu recounted the events of that fateful morning.

“It was a morning like any other for me. I was living in Nanyuki and working for a security company at the time. I woke up early and went to work at around 5 am. Just outside the mall where our office was, a man wearing a mask over his face suddenly emerged from the shadows and splashed a liquid on my face.

“The air was pungent. My face was burning. My eyes were on fire!”

He initially thought the masked man was out to mug him but the attacker dashed off in haste. Kairu knew he had been attacked with sulphuric acid and tried to wipe his face with his hands but felt the skin peel.

‘THREE HOURS TO BE ATTENDED BY DOCTORS’

One of the nearby security guards helped him wash his face under a running tap before being rushed to Nanyuki Referral Hospital by a close friend.

“It took three hours to be attended at the hospital. All that time, the acid was burning my skin and damaging my eyes. They only came and gave me two injections, without explaining how they would help me. I was in so much agony I couldn’t think clearly. By this time, I was blind.”

At around 9 am, doctors finally showed up. “They rinsed my eyes out with a special liquid. I remember they used up six bottles. I heard them whispering amongst themselves about how there was a good chance I would lose my eyesight for good. My heart sunk. How was I going to adjust to life as a blind person?”

Fearing his attacker would follow him to the hospital, Kelvin refused to be admitted and was discharged.

“They finally let me go home after I promised I would come back for checkups. I was sent home with a pack of tablets and eyedrops,” he said.

His wife, who hadn’t been informed about the acid attack, was horrified when she first saw his burnt face.

“I didn’t want her to panic, so I had asked my friend not to call her. We reported to the police before going home. My wife broke into tears when she saw me.”

It took two weeks for Kelvin to start regaining his sight. “The first time I saw my face in a mirror, I was shocked. My face looked like nyama choma. The skin had peeled off, leaving open sores which were oozing pus,” he told Sunday Standard.

“My neck had sores which weren’t healing and they had to graft skin from my thigh. Later, they also performed a contracture release surgery, which made my neck more flexible. My neck had grown stiff as I healed.”

But as he healed physically, Kelvin’s mental health deteriorated and he started having suicidal thoughts.

“I would joke and laugh when in company. But inside, I was dying. I couldn’t sleep. My appetite and libido were gone. My self-esteem had disappeared.

“I would have nightmares. I kept wondering why I had been attacked. Why me? I had only been in Nanyuki for a month and didn’t have any enemies that I was aware of. Who had done this to me? Whenever I found myself alone, I would weep my eyes out,” he said.

“Some people would compare how I look with my unscarred face. Such comments made it even harder for me to accept myself.”

His first suicide attempt came when his wife and two young children had left to visit a relative.

“I went to a chemist and bought 30 anti-allergy pills which I thought would be enough for me to sleep forever. I took them all and lay on the sofa. Luckily, my next-door neighbour got suspicious when he came knocking and I didn’t answer. He opened the door and found me unconscious. He called other neighbours and they took me to a nearby clinic. Nobody even considered that I needed therapy. They just took me back home and that was it.”

In May of this year, Kelvin tried to take his life again.

“I desperately wanted someone to talk to. I called my close friends and all of them were unavailable for one reason or the other. But one sent me some money so I could get out of the house and relax.”

Kelvin traveled to Thika, where he booked a cheap hotel room.

“I wanted to succeed this time so I took more Piritons, added a dose of antibiotics, and a bottle of undiluted pesticide. I started thinking of how my family would look for me everywhere.

“After taking about 80 sleeping pills, a handful of antibiotic tablets, and a small bottle of potent pesticide, I went live on Facebook Live to bid farewell to my family. I then lay on the bed and waited for death.”

“That was a silly mistake…maybe the last cry for help. People started calling me but I ignored their calls. I started feeling nauseous and dizzy, which I took as a sign that my plan was working. I lay back on the bed and waited to die.”

To his surprise, he was still alive in the morning and without even the slightest ache in his body. “I had no stomach-ache, nor headache and I hadn’t vomited, so I don’t know how that could be. I was so angry and disappointed I just wept.”

He went downstairs, intending to buy more drugs to complete his mission. Fortunately, a concerned stranger approached him. “My legs were weak, so was staggering slightly and supporting myself on walls. An old man came and asked me if I was alright. I lied to him that I was just drunk. But someone else recognised me from my Facebook video and alerted everyone that I was suicidal,” he recalled.

“They took my phone from me and answered a call from a friend who was trying to trace my whereabouts. The Good Samaritans took me to a nearby hospital as they waited for my friend and wife to arrive.”

He remembered feeling angry and empty and even angrier when he was tricked into going to Mathari Mental Hospital where he was forcefully admitted.

“I kept telling them I wasn’t mad, but nobody listened to my protests.”

He left the hospital a fortnight later and finally accepted his reality.

“I was given antidepressants and taken through therapy. I realised my life still had purpose, in spite of my scars. From that point, in May 2019, I have been feeling more positive about my situation. I’m determined to live my life fully.

On if his attacker was identified and caught, Kelvin said: “No. The perpetrator remains a mystery. Even the CCTV cameras from the mall didn’t help. I still wonder who it could have been. But even if I don’t know my attacker, I have forgiven him. Even if I met him and he tried to explain his reasons, I wouldn’t want to hear them. It wouldn’t change what happened. It wouldn’t give me back my unscarred face. For my own sake, I’ve forgiven him,” Kelvin concludes.