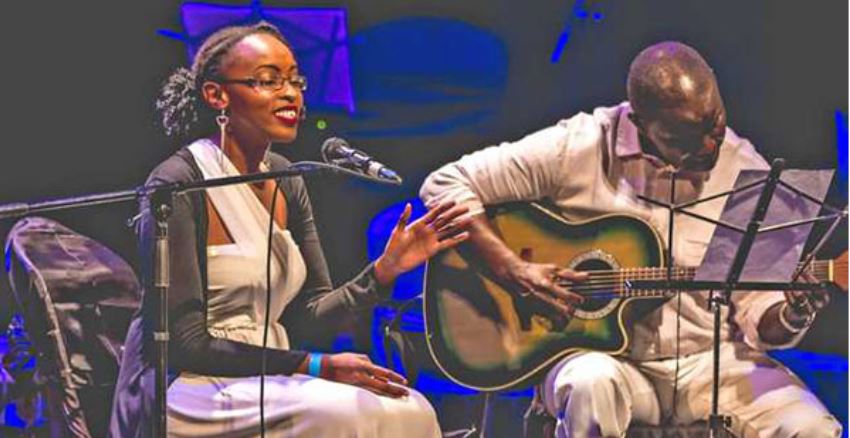 Maryolive Mungai, 31, took a leap of faith when she quit a lucrative corporate job to follow her dreams in music.

She talked to the Saturday Nation about how she went about it.

“I’m a lover of life, music and art. I’m also a thespian, though the last film or theatre production I participated in was a long while back. But to me, classical music is acting as well because we are telling stories through melody and emotions.

Growing up, I always loved music, especially rock and RnB. Classical music came to me much later, when I had just finished high school in 2007. My friend introduced me to the choir at the Nairobi Music Society. I was hesitant at first because the classical genre just didn’t sit right by me. But I signed up immediately I heard the choir sing.

I started singing with the choir more frequently, up until I met my voice teacher, Nancy Day, helped me discover my voice, open up and explore the classical scene. The first two years of my vocal studies featured pop music, interestingly.

One day, Ms Day randomly said, ‘Hmm. You have a really interesting voice. Why don’t we try classical music?’ And I was scared because all I had practised in my life was pop and RnB. We gave it a shot anyway and it was definitely awkward. (Laughs). It is a very interesting technique and it took a year for everything to set in and make sense.

Doing something that is not very common makes you stand out like a sore thumb, so I soon started getting calls asking me to perform at different gigs. I started performing a lot through the Kenya Conservatoire of Music.

I paid for my classes for a while, but it became too expensive for me. I was studying actuarial science at the University of Nairobi at the time, and my parents were not as supportive at the time.

I stopped the classes altogether. Unbelievably, the director offered me a full scholarship at the institution, and this really fuelled my growth in music. I was able to do the Associated Board of the Royal Schools of Music (ABRSM) examinations and exposed to more concerts. I’m eternally grateful to them.

Sooner than later, I completed my degree and joined the corporate world. It really was not for me, and I came to realise how unhappy I was a year and a half later in 2012. The work environment and the pay were good, but it took a lot of effort from me to keep my head in the game. I decided to take the jump — to quit and pursue music full time.

My parents gave me four months to figure things out, [failing which] I would go back into the corporate world. I had no plan whatsoever.

After a month of staying home, I received a call asking me to audition as a singer in an opera. Here’s the thing. There are different styles of singing classical music. Opera is grand, and the most athletic form of singing you could ever think of. I was used to the simpler classical pieces. It took a friend’s persuasion to try out the auditions. They loved my voice and cast me. It was unbelievable.

The show, “The Marriage of Figaro”, had an all-Kenyan cast that included Ian Mbugua and Julia Luvai. I was playing Ian’s wife, and my parents were in awe of the performance. That, plus the paycheck, made them offer their full support. (Laughs).

Music has been a full-time job for me since then. I balance between performing and teaching. I started the latter in 2014, once I got my ABRSM papers and built my reputation as a singer. I decided to pursue a degree in music in 2014 from the Technical University of Kenya because I wanted to be absorbed in music.

I did not want to be mediocre or approach it with one foot at the door. I was all-in. I was willing to crash, if that’s what was to happen, as long as I was happy. While there, I got a one-year vocal scholarship to Liverpool.

I do peripatetic teaching, meaning it’s more of a consultancy and part-time teaching in schools, most of which require my services in the afternoons. I take advantage of the mornings to practice and work on my songs. It becomes full-on recital practice for a few weeks prior when I have gigs coming up. I love the fact that I am able to create my own schedule.

“Faces of Love” came about after looking through my repertoire and realising the many aspects of love in it. I want to explore the different sides of love that cuts across all relationships, even with all the in-betweens. Love in friendship, music, romance, losing a loved one, having a friend pass away and especially in oneself, which I really value. Everyone will get to experience all of it.

My absolute favourite piece is “Song to the Moon”. It has such a beautiful melody. It is originally in Czech, written by a composer called Antonín Dvořák. I’ll actually be performing it at the recital, but in English, of course.

Moving forward, I want to keep growing. I want to get better and do things differently. I want to be a better musician and influence to the people who may look up to me. I hope their doors are open through me, something I believe will happen if I keep growing.

I also want to keep working and exploring my own music. I play the guitar, piano, plate and saxophone. But no one can see that through my classical side. It takes precedence over the other skills. I’m working on songs, already.”

Loading...
The Top Stories on the Internet Today (Monday September 30) < Previous
“I’m Leaving Modelling for Actuarial Science” – Miss Universe Kenya Next >
Recommended stories you may like: