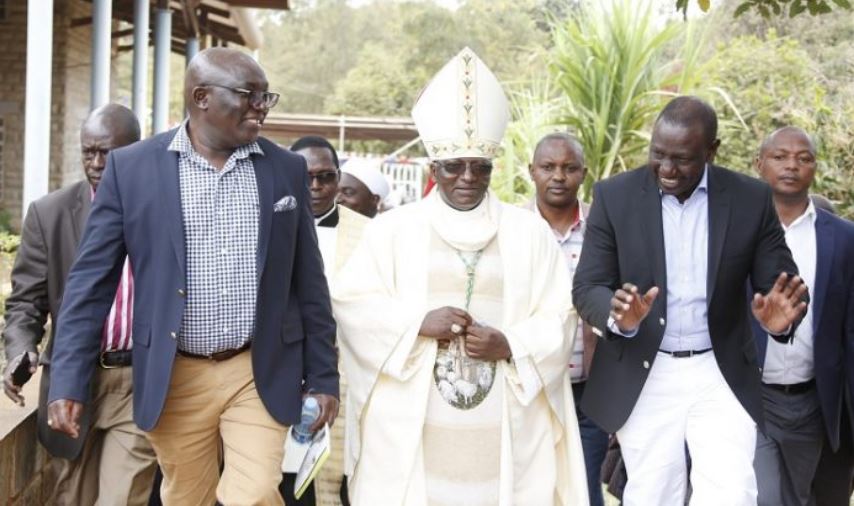 Bishop of Catholic Diocese of Embu, Rt. Rev Paul Kariuki now says his remark likening Deputy President William Ruto to a honey bee and his opponents to flies was misinterpreted.

Last Sunday, the Bishop made the remark while speaking about the Kieleweke and Tanga Tanga factions. He opined that Ruto was a productive honeybee which flies off to far distances to seek raw materials to make honey while his rivals are houseflies that hover around filth.

But speaking in his office at Karurina Chapel on Tuesday morning, Bishop Kariuki said that he was appreciating Ruto’s development tours around the country and encouraging him to keep it up.

The cleric further explained that he asking DP Ruto’s rivals to emulate him instead of fighting him.

Bishop Kariuki also noted that his honey bee analogy was meant for all Christians and not just DP Ruto.

“I gave the example of our Deputy President who goes round the country to see how government money is spent as well as identifying what needs to be done,” he said.

Kariuki added that he was concerned about the infighting within Jubilee government.

“Jubilee government is a divided house that needs to be reminded that they were elected under one umbrella; hence need to put their house in order to avoid criticism,” he explained.

The Bishop further cautioned politicians against engaging in early campaigns as this may divide Kenyans.

“If it is overdone, then it is not proper because in every movement there are expenses. The Deputy President does not move alone; he moves with a group of people,” he said.

Kariuki also reiterated his 2016 stand on barring politicians from politicking in church.

“While we welcome politicians, because they are also our believers, they are welcome to come and worship like the other Christians and if the Christians are having any kind of fundraising or offering they also fully participate like any other Christian,” he said.

“Christians from all walks of life go to church with one intention of encountering God therefore the church is and still remains a house of prayer and not a political rally,” he asserted.

Loading...
The Trending Images This Thursday < Previous
New Global Report Shows Kenyans Most Optimistic in Africa Next >
Recommended stories you may like: