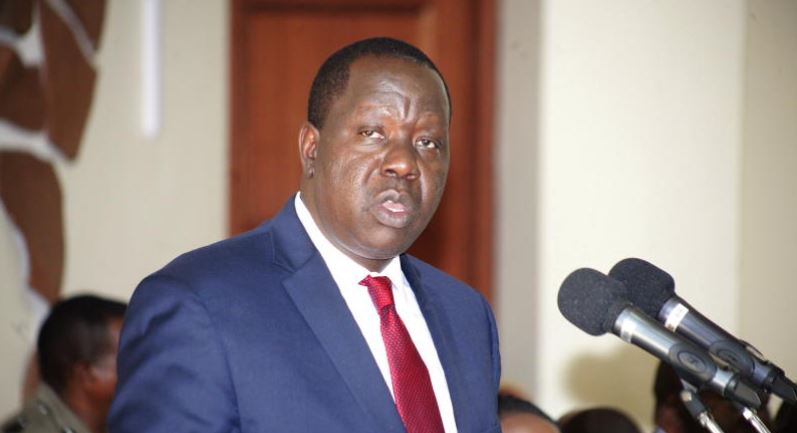 Interior Cabinet Secretary Fred Matiang’i has rubbished reports that there is a shortage of fabric for the new police uniforms as “outrageous”.

While responding to an article carried by the Standard that claimed the government is looking to import the uniforms, the CS stated that the State will not succumb to pressure from merchants engaging in “monkey business”.

“This monkey business that has been happening in some corner should stop. It is outrageous for someone to say that we don’t have materials in Kenya.”

The tough-talking minister further noted that the government had already paid local manufacturers to produce the new uniform and that everything was on course.

“I have seen some comments that are very shameful! We have no problem providing our police with uniforms. Actually, we have paid for the new uniforms and they are being done,” Matiangi said.

According to Matiang’i, the government has 600 personnel from NYS that are currently working on the uniforms.

“Why would we revive Rivatex then we proceed like fools to import the uniforms? We have no problem providing our police officers with uniforms,” he said.

The new uniform was unveiled by President Uhuru Kenyatta in September and was supposed to be rolled out on Jamhuri Day.

The revamped police uniforms — deep blue for work, navy blue ceremonial outfit and a deep blue working dress jacket — are part of the change of policy in the National Police Service.

Loading...
Another One! Wealthy Tycoon Jackson Kibor Divorces “Big-Headed” Third Wife < Previous
Kenya’s Private Security Guards to Own Guns after Undergoing Training, Vetting Next >
Recommended stories you may like: