One on One with Raila Odinga on Handshake Deal, Referendum, Relationship with President Uhuru 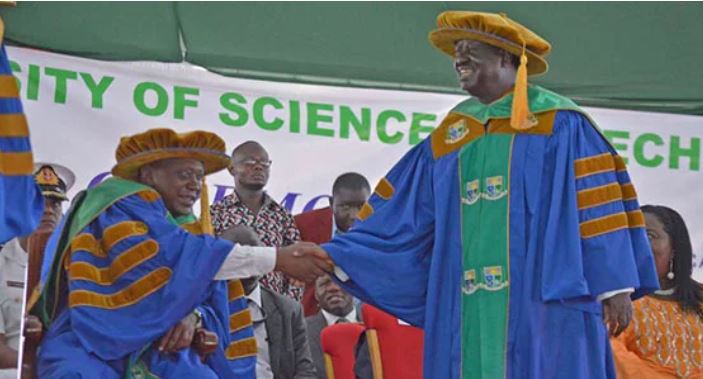 The leader of Opposition Raila Odinga spoke to Sunday Nation on several topics including, his new role and position in government, the state of opposition, the Building Bridges Initiative, and more.

It is nearly a year since you took the controversial presidential oath. How much has the country changed?

I remember on December 25 last year when I went for the annual Christmas prayers at Kang’o Ka Jaramogi church, Nyadik Fridah, a sister-in-law, came to the podium when I was talking and handed me a copy of the Bible to take the presidential oath.

The matter of swearing-in was very pregnant then after we had postponed it on Jamhuri Day. You could feel the tension. That was how we ended the year, on a very wrong note.

If you contrast now and then, we have made tremendous advancements in trying to reconcile the country.

It is like day and night and Kenyans are beginning to appreciate each other. To that extent, the handshake has yielded positive results.

Things were getting out of hand, we would not have a country today. You remember after ‘swearing- in’, we had said we would remove all presidential portraits in public premises and burn them.

Then start to collect taxes in our strongholds and run our own affairs, in other words declaring autonomy.

For the president, he had said anybody swearing themselves in as president would have committed treason, which is punishable by death.

They had said they would arrest and charge me. The stage had been set. Both would have caused an implosion whose consequences are too grave to contemplate.

They had nothing to do with this. It was purely home-grown. You remember we did the handshake on March 9 before Tillerson (former US Secretary of States Rex Tillerson) came calling.

We knew doing so after he comes or when he is around would have given the impression that it was the West that brought us together.

You went ahead despite clear warnings from the State and took the oath, were you surprised they didn’t arrest you?

Not at all. We had said we were prepared for it if that was the price to be paid to end election shenanigans. It was none of our worries.

There was a long period of lull after the gazettement of the Building Bridges Initiative (BBI), which fuelled reports that the BBI was being frustrated by those in government who are against the handshake. What was happening?

The gazettement came in the middle of the financial year and so it was hard getting money for them to operate. They are now working in earnest and have visited many counties.

If they recommend a referendum in their final submissions, what will be your proposal?

At Bomas, we had proposed a hybrid system which is both parliamentary and presidential. In France, the president is elected and has powers over certain portfolios and they too have a prime minister who heads the majority party.

S/he forms government in consultation with the president. It could also offer an opportunity to cure the gender representation. Because of historical divisions in our society, there is quite a bit of chauvinism and it may not be possible to attain one-third gender through Parliament.

What kind of a relationship do you have with President Uhuru Kenyatta now?

We compare notes on critical issues on a regular basis. We are all committed to ensure what we agreed on and signed is implemented, and you can see this in the corruption war among others. He is leaving no stone unturned.

How frequent do you talk?

Regularly. Rarely does a week pass without us talking.

As a result of your newfound ties with the President, some watchers now say you are the second most powerful man in the land.

Power is in government and it is wielded by those who hold the instruments of power such as the president, his deputy and ministers. I am not in government.

We are out here as opposition and want to see that the government does the right thing for the people; that is our role as the opposition.

But how do you check the government when you are co-operating with it?

Most people are still stuck in the parliamentary system. In a presidential system like ours, opposition does not have to be adversarial. We now critique quietly.

What would be the need of shouting when I can get audience with the right person?

We have also set up a joint task force to deal with issues we feel are of concern to us. It would be foolhardy to again begin hitting the same government.

If you look at the presidential system which we inherited from the United States, oversight is not just the role of the opposition but also of the ruling party.

Our members are playing their role in Parliament very well. What then would you say in counties where we run? We are the government in Kakamega, Busia, Mombasa, Siaya and so on.

The transformation began with coalition government when President Mwai Kibaki and I were forced into a national unity government.

Still there was internal opposition, what I would call self-criticism. Remember we tackled a lot of graft cases then.

We do not want to talk about succession politics. This is not the time. We want to deal with 2017 mistakes so we move without repeating the same going forward. Campaigning now would be premature.

You have seen some people moving around every weekend campaigning, the danger is this can set the country in an election mode at the expense of economic growth.

Anyone campaigning now is out to sabotage the reconciliation programme we are undertaking with the president.

Deputy President William Ruto’s lieutenants say your coming into the equation since March has led to a strained relationship between their man and the President. Do you take responsibility for this?

I am not in Jubilee and as such I am not competent to talk about the relationship between the President and his deputy.

Ruto himself has been saying in public that they relate well with the President. On whose authority would his foot soldiers then contradict him?

He has equally told us that he is only ‘mtu wa mkono’ (errand boy for the President). I have no intention whatsoever of undermining the relationship between the two gentlemen.

Loading...
CRAZY: The Funny Pics/Memes Going Viral on Kenyan Social Media < Previous
“President Uhuru is Entitled to his Opinion.” Maraga on Alleged Lenient Bail Terms Next >
Recommended stories you may like: