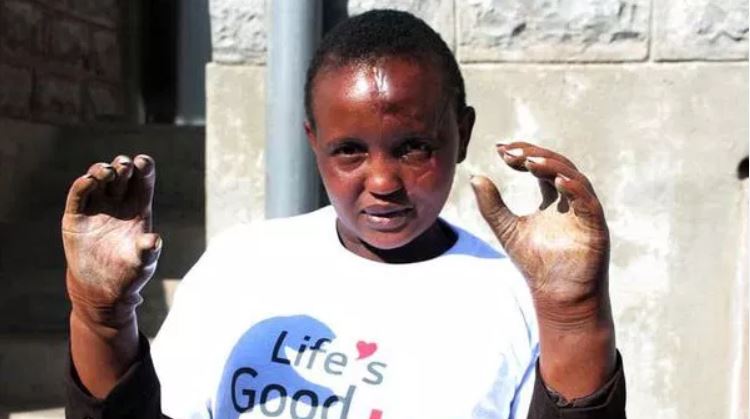 Jackline Mwende, the 29-year-old woman from Machakos County who survived a domestic violence attack in 2016, has done away with her prosthetic limbs, which were acquired at a cost of Ksh10 million.

According to Mwende, the artificial limbs are “expensive to maintain”. In an interview with K24, Mwende said that she sought a doctor’s help who told her that the limbs have to be flown to South Korea.

“The limbs were to be flown to South Korea for maintenance recently, and that comes at a cost. I currently do not have the money they are asking for. So, I decided to ditch the arms because they are not of help to me,” said Ms Mwende in the Sunday interview.

Jackline Mwende, whose hands were chopped off by her husband, received the pair of prosthetic limbs in August 2016 in South Korea, courtesy of LG Electronics. The tech company had initially funded her treatment at Kikuyu Hospital.

The state of the art artificial limbs operate under suction technology and are powered by electronic motors that use batteries.

Doctors estimated that the prosthetics would enable Jackline Mwende to perform up to 80% of all daily tasks.

Ms Mwende currently runs a mid-scale business at her home in Kathama Village, Machakos County, in addition to getting a Ksh25, 000 monthly stipend from German NGO, Merck More Than a Mother. The NGO also built Ms Mwende a 3-bedroomed house and a mini-mart.

In the interview, Mwende disclosed that she is still pained by the actions of her ex-husband.

Loading...
The Trending Images in Nairobi This Tuesday < Previous
The Top Stories on the Internet Today (Wednesday December 19) Next >
Recommended stories you may like: