“Everybody Should Carry their Own Cross.” Raila Odinga to Corruption Suspects 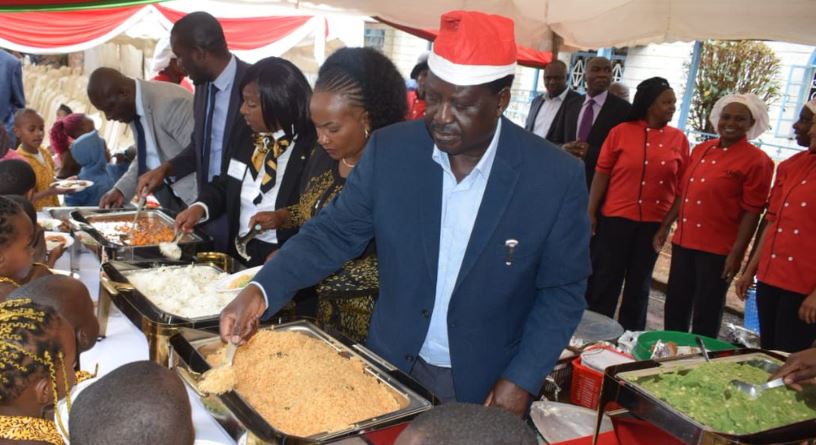 Opposition leader Raila Odinga has reiterated his support for the government in the war on corruption, further urging those implicated to carry their own cross.

Speaking on Monday during a Christmas luncheon at P.C.E.A Kangoya Child Development Center in Kiambu, Mr Odinga dismissed claims by a section of politicians that only one particular community was being profiled in the anti-graft war.

“The fight against corruption will continue and I support President Uhuru Kenyatta over this and those leaders saying that it was only one community being targeted should know that those implicated were not employed to work for the community and everybody should carry their own cross,” said Raila.

He was seemingly responding to a section of leaders allied to Deputy President William Ruto who on Sunday alleged that the war on graft was unfairly targeting one community.

The former Prime Minister further implored public servants to remember that they are working for the people, advising them to be wary of corruption deals.

Raila also supported President Kenyatta on his plan to reject a proposal by Members of Parliament to increase their salaries.

“I support the president’s stand to reject MPs’ increment of their salaries because if it is passed it will lead to the teachers, public service, police and other workers to push for salary increment… and where will the money come from apart from burdening Kenyans?” posed Odinga.

Loading...
Kisumu Woman Kills Self, Children in House Fire over Husband’s Second Wife < Previous
“I Regret Not Picking Mowzey’s Calls when he was Alive.” Musician Weasel Next >
Recommended stories you may like: