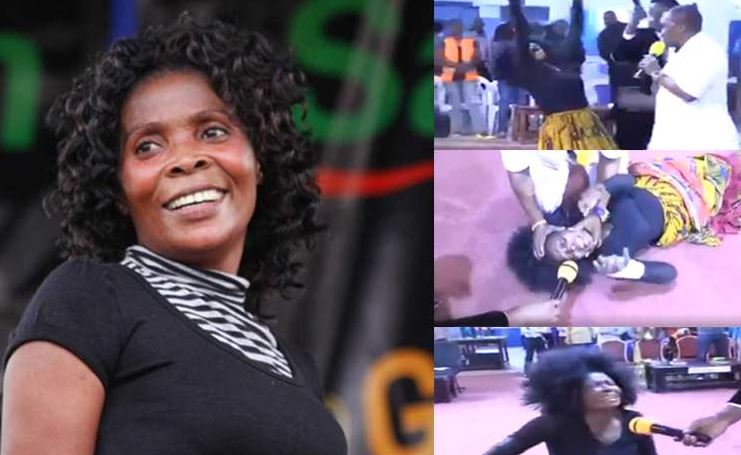 Tanzania’s Rose Muhando appears to have found a new lease on life following her viral exorcism video; the gospel singer has now changed her name.

During a concert last week with Kamba musician Stephen Kasolo, Rose Muhando revealed that her new name is Lioness. It was first announced by Kasolo, who old the crowd that: “Rose Muhando has now changed her name to Simba wa Kike (Lioness).”

The ‘Nibebe’ singer explained the name-change saying she had been through a lot.

“I have gone through a lot. The hardships have given me a chance to build endurance, hence the reason you can call me Lioness.”

She added, “My job is to hunt. I’m not scared of anything. When I roar, hell knows things just got messy. We will not keep calm till God receives all the glory.”

Rose and Kasolo have a song together titled Hautasumbuka Tena.

In a clip of Rose Muhando’s alleged exorcism, the singer claimed that she had been held hostage by 10 demons. They were exorcized by the controversial  Kenya Pastor James Ng’ang’a.

The video has left many fans and industry stakeholders concerned and shocked, with some offering to help Rose Muhando.

Muhando’s colleague, Christina Shusho, said, “The video of Rose Muhando indeed left me in shock. She is a colleague in the gospel industry, and I wouldn’t want to say much about the footage.

“Rose is my friend. We have always communicated, though not very frequently. I am sorry I did not know how deep-rooted her problems were, given we live quite far apart from each other.

“Had I known earlier, I would have done something to help. We are with her during this trying time, and promise to pray for her. I assure you that something is being done.”

Kenya’s Papa Dennis is another artiste who has vowed to help.

“I would like to call on all my fans and every music loving persons to pray for our mother in the gospel world Rose Muhando so that she can overcome the challenges she is facing. I want to ask my fellow gospel artists to come together and we find a way of helping out,” he said.

“After she is ok I am ready to fund her music by doing 2 audios and 2 videos for her. My sister may the lord see you through. God loves you and soon he will use you again,” Papa Dennis added.

Loading...
Ex-Citizen TV Anchor Johnson Mwakazi Set for Comeback on New Station < Previous
Sheila Kwamboka Claps Back Brilliantly after being told to Wear Push Up Bra Next >
Recommended stories you may like: