A 4-year-long probe into the killing of a former MP’s bodyguard and two of his relatives has ended with capital punishment for the two accused police officers.

The two constables based at the Kabete Police Station; Benjamin Kahindi and Stanley Okoti were slapped with the death sentence for the murder of Joseph Ombogo, who was attached to former Bomachoge MP Joel Onyancha, and his relatives, Amos Okenye and Geoffrey Mogoi.

The accused were found guilty following an investigation by the Independent Policing Oversight Authority (IPOA) on the shooting incident that happened in Kangemi, Nairobi on October 7, 2014.

IPOA recommended that the Director of Public Prosecutions proceeds to charge the officers with murder. They were consequently charged with three counts of murder and found guilty earlier this month.

While sentencing the accused on Wednesday, Justice Stella Mutuku said she was satisfied ‘beyond reasonable doubt’ with all the ingredients of murder in the three counts jointly facing the former cops.

Mutuku said she found sufficient evidence to prove that the accused persons acted outside the law in performing their duties and shot to death the three deceased.

“I find sufficient evidence to prove that the deceased persons died as shown in the counts of murder and that their deaths are unlawful,” she said adding,”…I reject their respective defenses and find the defense of self-defense is not available,” she added.

IPOA in a statement termed the ruling as a milestone decision.

“This milestone decision reiterates the independence and commitment of IPOA in safeguarding the rights of victims of police killings,” said head of Communications Dennis Oketch.

Here’a statement by IPOA on the court ruling. 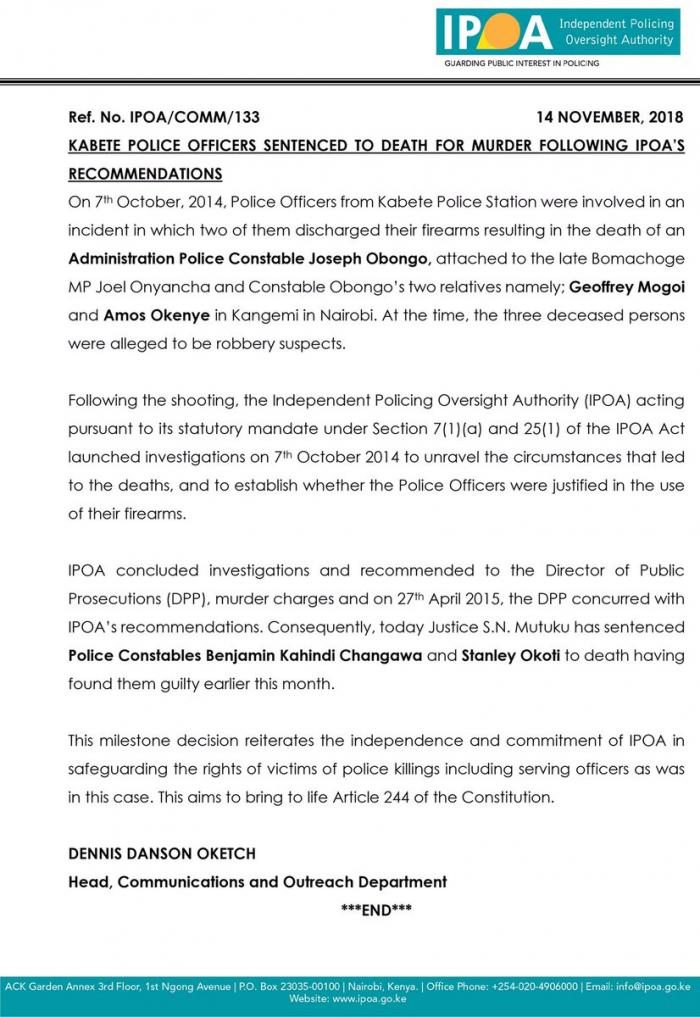 Loading...
AP Officer Manning Exams Caught in Lodging with KCSE Candidate, Condoms Found < Previous
DP Ruto Declares “There will be no Friends or Relatives in Fight Against Corruption” Next >
Recommended stories you may like: