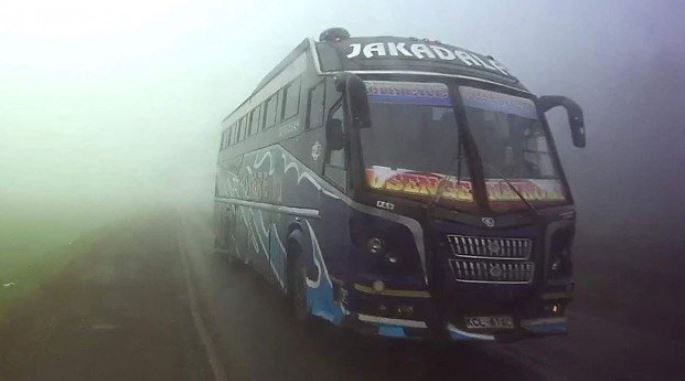 The driver of a bus that was filmed being driven recklessly on the wrong side of the busy Nairobi-Nakuru highway has been presented before the Court.

Hillary Shikuoko Panyola, whose licence has since been revoked by NTSA, appeared before Senior Resident Magistrate Electer Riany on Tuesday.

He was accused of driving without care, attention and unreasonable consideration to other road users by overtaking a queue of other vehicles. The prosecution also accused Hillary of causing another vehicle, a Mitsubishi Pajero KAR 801V, to sway off the road.

“On August 29, at about 8.40 a.m along the Nairobi- Nakuru highway at Kimende area, Lari sub county within Kiambu, the accused person drove the said vehicle without due care by dangerously overtaking,” the court heard.

The driver’s defence opposed the viewing of the viral video of the incident arguing that the person who recorded it should be the one to present it to court and a certificate showing ownership of it should also be availed.

The lawyer said the act of sharing the clip with the National Transport and Safety Authority was an afterthought.

In turn, the prosecution asked the court to have the witness in the case, who happened to be the one who recorded the video clip showing the accused driving carelessly, to avail the video before the court on a later date.

The court will, therefore, have to view the clip before the accused is convicted.

Hillary Shikuoko Panyula, the driver of the bus christened ‘Kawere’ and belonging to Rengcom Company, was arrested on September 3 and released on a police cash bail of Sh 5,000. He was granted a cash bail of Sh 80,000 after pleading not guilty on September 12 to the offense of carelessly driving.

The case has been scheduled for October 29.

Loading...
DJ Mo’s Playtime With Ladasha Is Daddy And Daughter Goals – WATCH < Previous
“Co-parenting With Bahati Is Not Easy.” Says Yvette Obura Next >
Recommended stories you may like: