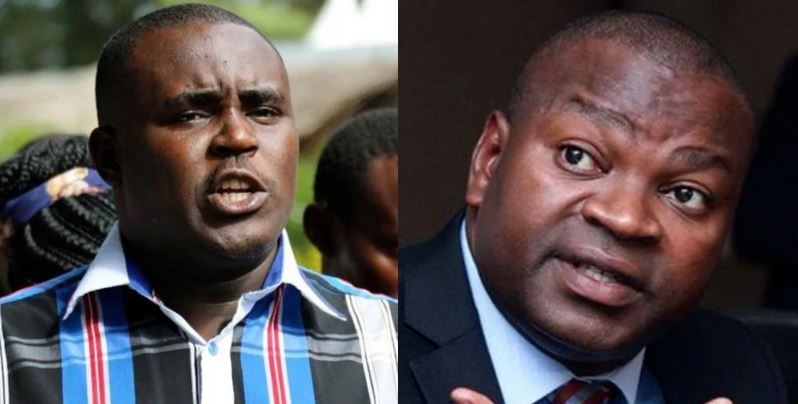 Sports Secretary Rashid Echesa has been summoned by the police over photoshopped ‘nudes’ of Kakamega Senator Cleophas Malala.

The CS is required to present himself to KICC Police Station today, Friday 26, at 10 am. He was linked to the ‘nudes’ by three journalists who were arrested and arraigned in court on Thursday.

“KICC police station have a reason to believe you Hon Rashid Echesa have information that may assist in investigation of alleged offence of Cyber Crime Act of 2018 ,” reads the summon.

A source who is privy to the investigations indicated that the three journalists, David Ndolo, Stafford Ondego, and Alex Njue, who are out on bond will be Senator Malala’s witnesses.

They have reportedly confessed to working under the instructions of the Cabinet Secretary.

Rashid, a self-professed ally of Deputy President William Ruto reportedly paid the journalists to photoshop Malala’s image to portray him in a compromising situation with a non-existent woman.

The aim was to allegedly flood the Internet with the nudes in a bid to tarnish Malala’s reputation, especially in Kakamega, where their supremacy battles have played out openly.

The vocal Malala, a close ally of Opposition chief Raila Odinga has been chiding Rashid as a Standard 7 drop-out who does not understand his work as CS.

“Yesterday in some social media network there was demeaning photos of the CS in an unknown lodging with a woman in compromising situations. When those went viral Rashid looked for journalists whom he sent the photos and told them to Photoshop and replace them with me and release them online. Because I have acumen on intelligence I was able to round up those journalists with the help of police,” Malala told reporters on Wednesday.

Malala, who is also the Senate Deputy Minority Leader, backed up his claims with mobile text messages and WhatsApp communication between the three photojournalists and a number believed to belong to Echesa.

According to the text messages, the CS sent the journalists Sh5,000 through his personal driver. According to Malala, the CS forwarded the demeaning photos directly to his cellphone.

“Seconds after Ndolo sent the Photoshopped images to the CS, he forwarded to me the same. So I am a witness too in this case. We confiscated their phones and laptops,” Malala said.

He added that he had instructed Siaya Senator James Orengo as his lawyer and engaged an expert to help with evidence gathering that would eventually be used during prosecution.