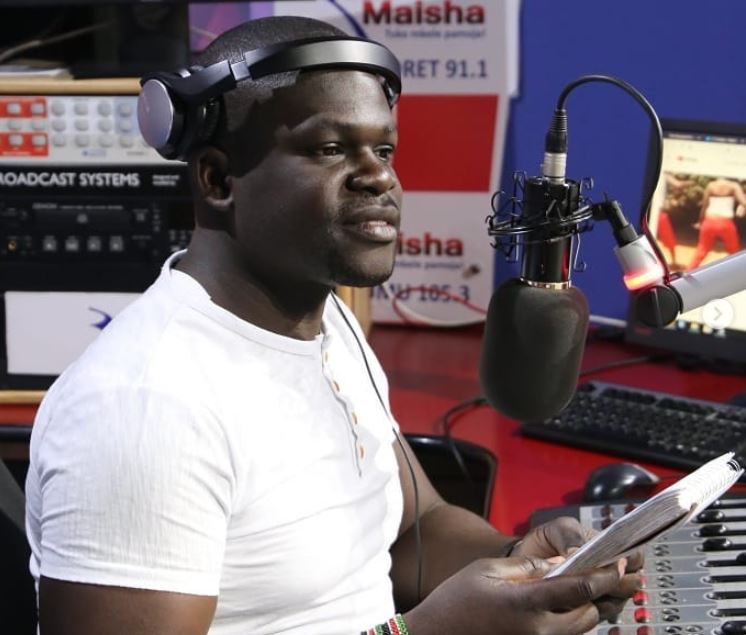 Billy Miya is an award-winning radio presenter at Radio Maisha. He is undeniably a household name and is hugely rated by his audience.

Though popular on radio, little is known about Miya the family man who follows a strict religious lifestyle. He opened up to SDE on his real self, struggles with Kidney stones, career on radio, and his young family.

Who is Billy Miya?

I am a radio, social media guru, parent and a husband. I am a humble guy and does not take alcohol. I go to clubs but only to entertain fans.

Tell us about you early life

I grew up in Mombasa where I attended primary school and partly secondary school. I left there while in form one and relocated to Kisumu where I continued with my secondary school education to completion at Our Lady of Mercy Ringa Boys Secondary School in Oyugis in Homabay County. The school hardened students to the level they could survive in any profession without strain.

Where did your radio career begin

I started my career at Pwani Fm.

Was it your dream to be in radio as a child?

With time my interest grew from listening to radio and television and strongly thought I could do the same in real life. When I was through with my form four studies I applied for a diploma course in Mombasa Polytechnic, currently Technical University of Mombasa.

I luckily got an admission letter but for unknown reasons somebody hid it. When my father travelled to the school to inquire why I had not gotten the letter, he was told the letter was send two months ago and the intake was long overdue.

They told me the only option remaining is to take a certificate course. I did it and later on did my attachment at Pwani fm where I went on to host the Tafrija la Pwani evening show, the biggest in the region at that time.

Tell us about kidney stones you once struggled with

There was a lady that used to give her vehicle for hire and from the it I created a very good business relationship with her. But she wanted more. I objected her advances to her disappointment and later claimed I messed with her vehicle and demanded a refund before reporting the case to police.

While handling the case at the police station is when I started feeling a sharp pain in my lower abdomen. While driving back from the station, the pain became too much that I could no longer drive prompting me to rush to a nearby health facility.

I was admitted for a week and was diagnosed with Kidney stones. I had an operation which treated the condition for good.

What has changed since then?

A lot has changed. When I got my first born son, there are many changes that I executed in my life, like cutting off friends and making sure whatever I do is for the good of my family.

This is to ensure I save enough for them, to ensure even if I will not be around long enough they will still live a good life. I also became more religious and treasured my job more because it is the lifeline for my young family.

While at Pwani Fm your audience had a certain perception about you. Some said you were a playboy. Is it true?

The person who was there before me had made the program very big and popular. Stepping into those shoes and maintain the audience required that I also transformed into something big. It was for that reason that I created a playboy-like perception. I was just a character on air to impress the audience.

What was the most memorable time on radio?

There was this time that I received a call during a program at Baraka Fm which was about re-uniting broken lovers. I got a text from someone in prison and the person wanted me to inquire why his wife left him. I didn’t know he was in prison.

When I called her wife, she said she had really struggled with the kids ever since he (husband) was arrested and jailed two years ago and had nothing more to take to him in prison. She said her husband was the sole breadwinner and her casual jobs would not yield enough for both the survival of her kids and needs of her husband in prison.

I rallied my listeners and collected Sh10,000 to help the guy. We gave it to one listener who bought the essential needs and took them to him. The whole idea and successful implementation really moved me.

Loading...
Ex-Cross Over 101 Presenter Faith Muturi Shows Off Bump for Baby Number Two < Previous
CRAZY: The Funny Pics/Memes Going Viral on Kenyan Social Media Next >
Recommended stories you may like: