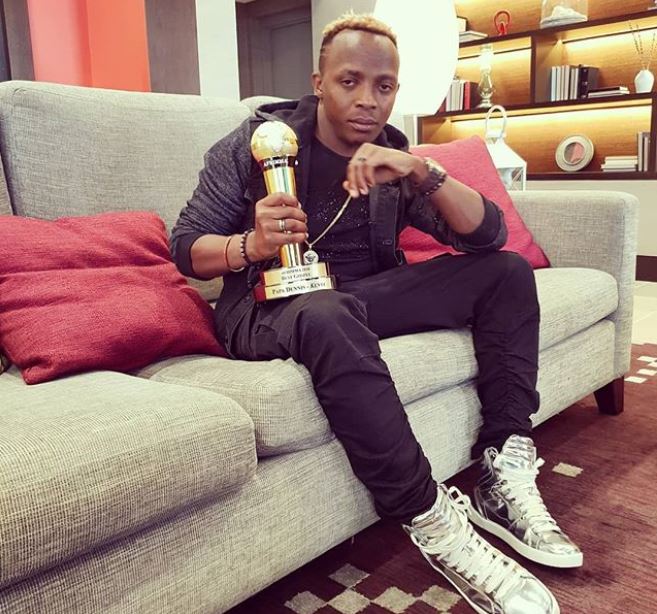 It was his first international award and Papa Dennis couldn’t believe it when his name was called out as winner in Dallas, Texas.

He spoke to Buzz about what’s next for him after scooping the coveted award.

Congratulations on your win.

Thank you. This award is for the whole Kenyan gospel industry as well.

I am grateful to all who voted for me and ensured I emerged victorious, even though I didn’t expect to. I can’t thank them enough.

Why didn’t you expect to win?

I had attended all of the last editions of AFRIMMA, including those of which I hadn’t been nominated in, but I never won. I kept saying my time is yet to come bearing in mind I have only been in the game for four years.

So when my name was called I just couldn’t believe it, I was hesitant to go forward and my manager Sadat had to push me to step onto the podium to receive it.

Is this your first international award?

Yes, it is, and that is why it really means a lot to me.

Finally! I am glad the world is taking note of my music.

I am still new in the game and when such moments happen, they take your motivation a notch higher.

Did the Award come with some prize money of some sort?

Not at all, but by and large the win was a significant marker of the growth of my music.

So what next is it for you, as far as international recognition is concerned?

I am now aiming for the BET (Black Entertainment Television) Awards.

It seems like a dream but, just like AFRIMMA, I will work to see that dream come true.

Your musical journey is a perfect script of “from rags to riches”?

Yes. I started from humble beginnings, singing in church as a member of the praise and worship team.

I wanted to pursue music from an early age but my dreams were hindered by the death of my mother, who was taking care of me and my twin brother.

After her death, in 2006, our lives became miserable and I was forced to do odd jobs just to make a living while also trying to save for my music.

What kind of odd jobs are you talking about?

I relocated from Matunda in Kakamega, where I was born, to Kisumu and ventured into the clothes business; selling ladies’ undergarments ranging from underwear, bikers among others.

However, after the 2007 post-election violence I returned home. I still wanted to pursue music but I couldn’t raise much money to kick start my career.

I kept taking part in various talent competitions until I was spotted by Sadat Muhindi of Maliza Umaskini Foundation, who took me in and, as they say, the rest is history.

Since meeting Sadat your life changed completely. You now lead a lavish lifestyle. Why brag and boast a lot of the riches currently at your disposal?

True. Under Papa (referring to Sadat) my life changed for good and I thank God for him. I was poor but not anymore.

However, I don’t boast or brag, I just show appreciation to what God has blessed me with and, at the end of the day, all these riches are only earthly and not heavenly.

You have recorded some high end music videos and some critics think you always overprice their cost. What’s your take?

They’ve got their opinions and I respect that. But why would I over price a video that features me on a helicopter on air, super cars like Lamborghinis and some exclusive locations among other features?

So you spend millions of shillings on a single video?

I don’t decide what to spend on shooting a video, my manager Sadat and his team do.

Besides, he is one person who believes in quality and will never settle for anything less

Your song “Tornado” with Ray C sparked controversy that you had quit doing gospel music.

I am a gospel artiste that remains a fact. About “Tornado”, that was a love song and love is in the scriptures.

Songs of Solomon are but only love poems in the Bible, so what is wrong if I sing of the same?

What is one thing that you struggle with?

Speaking fluent English has been my major hindrance while communicating.  After the death of my mother I never got a chance to complete school.

But I sacrificed, doing odd jobs, to pay for my twin brother’s (Simon Mwangi) education until he was done with his secondary level.

So how do you communicate with international artistes who don’t understand Swahili?

I try my best to pass the message and make sure I am understood.

Now that you have the money why not go back to school?

I already am. I started private classes at home, in Lavington (Nairobi), this year and all is going on well.

You have a taste for expensive shoes, how much did this pair of black sneakers you wearing cost?