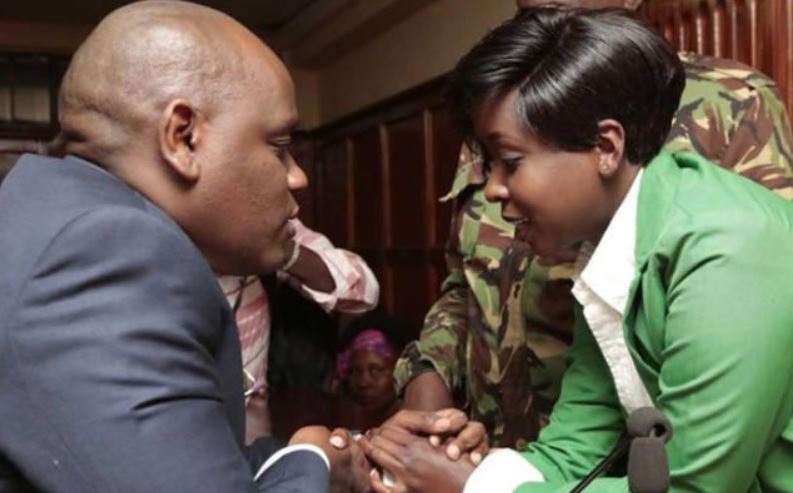 The controversial blogger is notorious and equally famous for his polarizing and often insensitive opinions, especially about Kenyan women. But on Wednesday, Nyakundi delivered some nuggets of wisdom about the people we associate with that impressed even his staunchest naysayers.

He was commenting on Dennis Itumbi’s inspired and heartwarming support for his longtime friend Jacque Maribe. Itumbi’s latest gesture was an open letter to Maribe’s young son Zahari to encourage him in the future.

In the letter, Itumbi describes Ms Maribe as a selfless person and goes on to tell Zahari that when he grows up he will come across some of the things his mother has been accused of – but all he needs to know is that she loved him dearly.

To Zahari, one day when Google returns results of the rumours and innuendo, may you also know Mum had friends who believed in her innocence and who, like many final verdicts by our Judges, know prosecutors and investigators are NOT always right. pic.twitter.com/bkBGyAeSPB

Reacting to the unfolding soap opera between Itumbi and Jacque Maribe, Nyakundi took to his socials to uncharacteristically praise the Secretary of Innovation, Digital and Diaspora Communications in the office of the President.

According to Nyakundi, Dennis Itumbi has given us lessons on how to navigate the tricky Nairobi social-scene that is full of leeches who gravitate around successful individuals.

Read Nyakundi’s opinion below and some reactions from netizens thereafter.

I’m sure Jacque Maribe has many friends, followers, fans and the likes. But when sh*t hits the fan, you’ll notice that number drastically reduce to almost zero. Because Kenya is fake. Nairobi especially has the fakest people in this world.

Only Dennis Itumbi has never been shy of defending her publicly. Her baby-daddy Eric Omondi has gone MIA, probably fearing that he will “hurt his brand” should he openly be seen associating with her.

And that’s Nairobi for you fellow Kenyans. Don’t confuse bar associations with real/solid networks. Nairobi is just full of leeches who gravitate around successful individuals. If you want to remain steady and focused, you have to shun these characters who only look for you when things are OK.

Dennis Itumbi has given us lessons on how to navigate the tricky Nairobi social-scene. Ladies especially are easily carried away by grand gestures from shadowy characters like Nigerians and the likes, people who can never identify with our struggles here in Kenya.

It’s incumbent upon everyone to know whom to share your time with. Do they add value to your lives or you just drink together? Do you feel any sort of growth/improvement when you’re around him or her or you are just glorified fuck-buddies masquerading as a couple?

A recent Q & A by Anerlisa was revealing about her skewed life choices and affinity to vanity. She was asked by a lady if it’s okay to send a guy money, something she categorically said “No”. But why should other ladies bear the burden of her poor life choices and being a poor judge of character?

If you’re looking for an eye-candy dude, one to show off to your girlfriends so as to boost your ego/self-esteem, they are a dime a dozen.

Comparing Dennis Itumbi with Jowie Irungu, you can see what Maribe’s priorities are. Skewed. She was better off with Itumbi who looks like he is focused and has a future. This other dude is just a life-ist who is just enjoying life.

So choose wisely people. This life there’s no rehearsal.

And here’s how social media reacted to Nyakundi’s wisdom:

aliusroberto: For once this n*gga made some [expletive] sense

nzisann: For once you have written something worth to read!

mwoha_njenga: This is profound Mr. President

winmadic: For the 1st time I agree with you

grandyandeka: Wisdom will kill you

yvonne_karly: ??? for once u actually wrote something helpful