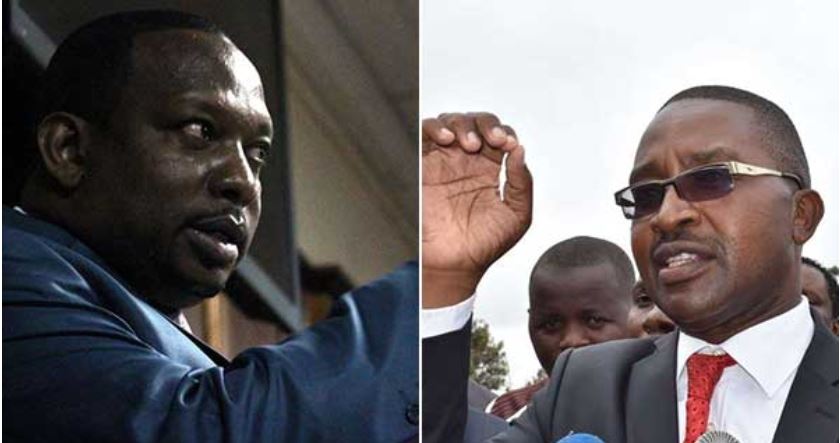 The tussle over Ndakaini Dam water between Governors Mike Sonko and Mwangi wa Iria has hit fever pitch after the Nairobi city boss dared his Murang’a counterpart to interfere with water supply.

Speaking during the official opening of the Nairobi ASK Show Thursday, Sonko maintained that Ndakaini Dam, which supplies 84 percent of the city’s water, is owned by the Nairobi County Government.

He noted that the Nairobi County administration purchased the parcel of land on which the Ndakaini Dam sits and even compensated residents who were displaced.

“Ndakaini Dam was acquired by Nairobi County and we compensated Murang’a residents who were displaced from that area. In addition to Ndakaini, we have ownership documents for Ruiru Dam, Thika Dam and Ngethu in Gatundu,” asserted Sonko.

“That governor is threatening to cut supply of water to Nairobi yet he has built on a road reserve in Nairobi. If he dares shutdown Nairobi water… My friend, let me not bring politics here because the president is around,” said Sonko.

“Wa Iria should not joke with us. I will deal with him if he touches Ndakaini dam. We will act on the building he has.”

Governor Wa Iria has been demanding for at least 25% of the revenue generated from water channeled to Nairobi from Ndakaini dam.

He says he won’t be cowed and will fight for the rights of Murang’a people.

“It is ridiculous for the Nairobi governor to assume that I can be cowed from speaking for the rights of Mt Kenya residents by threats that I have a building in Nairobi which he claims he can demolish. He should have done it yesterday.

“Mt Kenya people in Nairobi has suffered unrecoverable loss and trauma through unreasonable destruction of kiosks and business premises and we are now ready to pay whichever price to redeem our people from these oppressive forces,” said Wa Iria.

He told off Sonko claiming he has failed to rehabilitate Nairobi River which could be the source of water for the city.

“Michuki tried to clean Nairobi River and if Sonko is serious about water issues, let him clean the river which has converted into flowing sewerage,” he said.

Murang’a MCAs are expected to hold a public participation meeting at Ndakaini shopping centre on Monday next week to discuss the proposed water Act which will address the levy issue.

Loading...
All The Trending Images This Furahiday < Previous
EACC: Kidero Received Sh317 Million Cash Deposits in 5 Years Next >
Recommended stories you may like: