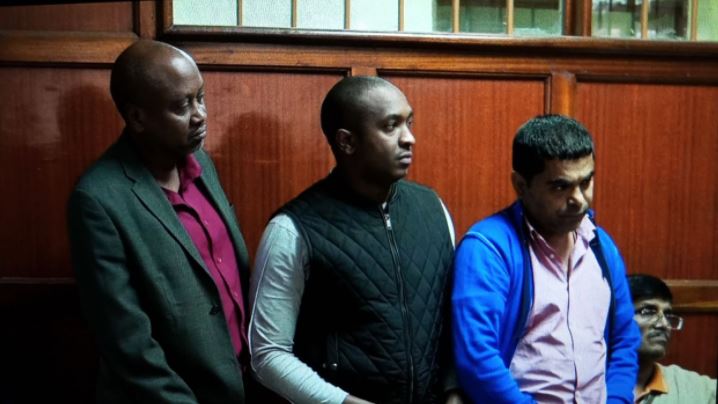 Controversial politician and businessman Steve Mbogo was on Tuesday arraigned before a Nairobi Court on gold fraud allegations.

The trio appeared before Milimani Senior Principal Magistrate Peter Ooko but they were not charged. The prosecution requested to have the accused detained at Kileleshwa Police Station pending the conclusion of investigations.

The defense advocates led by Edwin Sifuna, however, opposed the prosecution’s request on the basis that police already have all the details required to sustain a charge.

The Magistrate rejected the request noting that there were no compelling reasons to hold them.

Ooko further directed the prosecution to charge the three immediately or release them if it did not have enough particulars to sustain a charge.

Mbogo’s lawyer Edwin Sifuna requested that his client be given anticipatory bail to prevent further arrests. He accused the prosecution of being “mischievous”.

The complainant, Sayeed Mohammed Altaf, alleges that he was duped by the suspects into parting with his cash after he was introduced by Ishmael to a business deal involving the sale of gold.

In an affidavit, Stephen Wachira, a Nairobi police officer, claimed that they recovered from the suspects, mobile phones and gold imitated cubes that needed to be forwarded to the Mines and Geology Department for analysis.

He said investigations led to the arrest of the three on Monday, January 22, 2018, at around 5.30pm at a house in Parklands, Nairobi.

“The applicant requires four days to complete these investigations and also make a further arrest of accomplices and charge them before court accordingly.”

“We require time to forward their mobile phones to cybercrime experts for retrieval of some messages, which will assist us to complete our investigations,” he said, adding they want to ascertain if Mbogo and his associates are part of a gold scam ring.

The prosecution is now expected to return with a charge for the suspects.

Sonko Fires Three Aides of His ‘Dream Team’ After Three Months < Previous
PHOTOS – When President Uhuru Held Hands With the Late Hugh Masekela Next >
Recommended stories you may like: