Must Watch: Blinky Bill & Osborne Macharia’s Afro-futurist Video For ‘No Touch Am’ 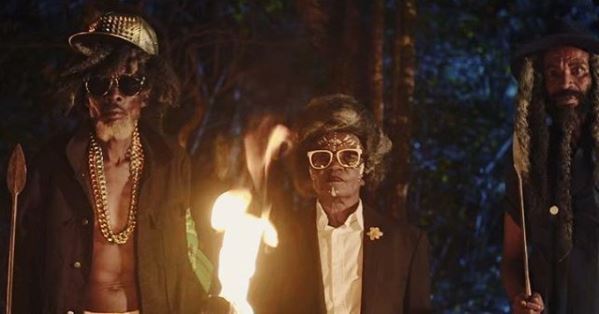 Kenyan beat maker and artiste Blinky Bill(formerly from Just A Band) has released the visuals for ‘No Touch Am.‘ Featuring German-Nigerian singer Nneka, ‘No Touch Am’, is the first video his highly anticipated forthcoming debut solo album, Everyone’s Just Winging It and Other Fly Tales.

The video, directed by Kenyan digital artists Osborne Macharia and Andrew Mageto, is a visual delight.

Osborne Macharia is best known for his unique projects including the visually stimulating LEAGUE OF EXTRAVAGANT GRANNIES that imagines three ladies enjoying their retirement by traveling the world, living lives of luxury.

‘No Touch Am’ video tells the story of 3 Hausa herbal men and animal charmers from the Northern State of Katsina in Nigeria, turned stylish protectors of the forest.

“The wild animals they once domesticated and used as domestic pets (a tradition passes down from their ancestors) are now expert trackers. Now both man and beast roam the forests at night seeking out illegal firewood harvesters while protecting indigenous flora,” Blinky Bill says.

Loading...
The Hottest Stories on the Internet Today (Wednesday December 20) < Previous
Zari Hassan: “Diamond is on Probation. Why Cheat on Me With a Low Life” Next >
Recommended stories you may like: