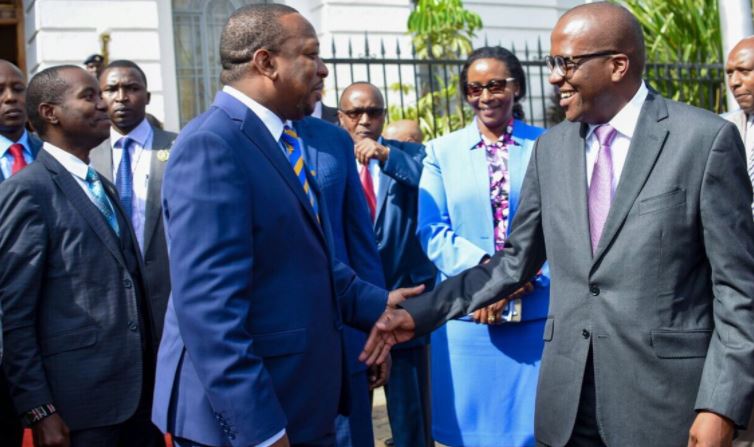 The story titled,  “Sonko and Igathe fall out as State House takes charge of City Hall,” revealed details of the workings of City Hall since the August 8 election.

According to the paper, State House has been virtually running Nairobi through Deputy Governor Polycarp Igathe and Tourism Cabinet Secretary Najib Balala.

“The Star has established Sonko and Deputy Governor Polycarp Igathe have a frosty relationship after the city boss learned of State House’s efforts to have Igathe run the show,” it states.

The paper goes on to add that it was State House that appointed the county executive officers, leaving Sonko to create the position of deputy county secretary to fill with his loyalists.

“While Sonko is putting on a brave face, people who know him say he resents erosion of his power and, in effect, his demotion to a ceremonial leader.

State House insiders tell the Star say everything is going according to Jubilee plan.

Last month, Sonko created the position of deputy county secretary — not provided in law — in an apparent attempt to accommodate his own loyalists. This is after State House filled most influential positions.”

The paper wrote that Sonko is fed up with his erosion of power and now spends most of his time at his private office at Lilian Towers.

“On November 8, the head of state told Sonko to his face to focus on politics and the leave day-to-day running of the city to Igathe and Tourism CS Najib Balala.

Igathe, former MD of Vivo Energy, is a well-connected professional.

This is understood to have taken place at a meeting on regenerating Nairobi, held at Harambee House and chaired by President Uhuru Kenyatta.

“The President told the boss to focus on city politics and leave Igathe to run the county. He [Sonko] did not utter a word, only nodded,” a source who attended told the Star.

Sonko now is said to be fed up with unfolding events and being relegated to bystander status.

He only goes to his City Hall office at night and spends the day at his private office at Lilian Towers, sources close to behind-the scenes manoeuvres tell the Star,” reads an excerpt from the paper.

But on Facebook, Sonko was quick to rubbish this story. He wrote that the two reporters involved in the writing of the story, Julius Otieno and Benjamin Imende were just bitter because he refused to ‘prequalify their proxy companies to do business with the county government corruptly.”

TODAY’S THE STAR HEADLINE: SONKO AND IGATHE FALL OUT AS STATEHOUSE TAKES CHARGE OF CITY HALL.

Nyinyi MASHOGA wangu wazamani wa THE STAR NEWSPAPER JULIUS OTIENO & IMENDE BENJAMIN stop your cheap blackmail coz I refused to prequalify your proxy companies to do supplies in Nairobi county corruptly. I’m in very good books with my Deputy POLYCARP IGATHE. The NATIONAL GOVERNMENT owes us over Ksh 80,000,000,000(80B) and already they’ve started releasing this money to us in bits. We shall continue to partner with them for better transformation and well being of Nairobians in terms of service delivery… Pelekeni USHOSTE wenu mbali magazeti tutafungia nyama jioni.

The governor also attached several text messages screenshots between him and Igathe, proving that his relationship with Igathe is not as painted by The Star.

For the next 2yrs, @MikeSonko & I will not be popular. Distractions will be put on our path but we will continue working to deliver what has failed our great city of Nairobi for 20yrs. To make this monumental change, we need to focus. After that, you can judge us from the results pic.twitter.com/Q5wM7LUrc5