What The Government Plans to Do About the Sachangwan Black Spot 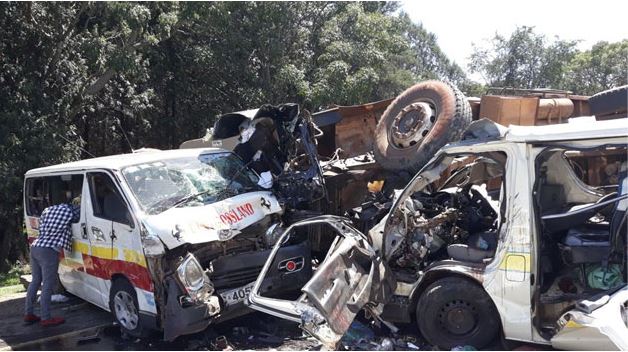 As other Kenyans celebrated Jamhuri Day on Tuesday, several families were mourning the death of their relatives after a tragic road accident along the Salgaa-Sachangwan stretch on the Nakuru-Eldoret highway.

The afternoon accident, involving more than 15 vehicles, claimed the lives of more than 30 people. According to witnesses, a trailer ferrying fertiliser to Nakuru from Eldoret was being pursued by NTSA officials and the driver lost control of the vehicle while speeding off, ramming into a bus, which then caused a pileup involving PSVs and private vehicles.

NTSA has since denied that it was chasing after the trailer saying that it was only trying to clear the way.

“They were alerted by the noise of some hawkers who normally sell around that market of Sachangwan. They were told that there is a vehicle that has lost control and is going downhill. It is then that the officers followed the vehicle and when they realised that it had lost control, they switched on the sirens and the strobe lights,” said NTSA Director General Francis Meja.

Following the recent rise of road carnage, President Uhuru Kenyatta directed the police and other law enforcement agencies to step up their efforts to ensure motorists obey traffic safety rules and regulations during this Christmas and New Year season.

Speaking during the 54th Jamhuri Day Celebrations, the President regretted the carnage that has so far been reported on roads and highways.

The CS said a dual carriageway between Mau Summit junction and Ngata will be put up in a month.

“The road will be redesigned in January to separate trucks from small cars so to save more lives,” he said on Wednesday.

Speaking at the dreaded Sachangwan black spot, the CS said officers were already setting up light masts between Kamara and Ngata.

“Following the recent accident at Maraba in Kamara that killed seven musicians two days ago, I talked to President Uhuru Kenyatta who ordered me to start lighting the stretch,” Keter said.

He said residents requested him to divert trucks on an old parallel road to the stretch.

The Tuesday crash happened just three days after another accident at Kamara on the deadly stretch claimed the lives of seven people, among them five local artistes.

Hardly a month goes by without a fatal collision happening along the stretch covering Sobea, Salgaa, Migaa, Sachangwan, Total and Mau Summit.

Loading...
PHOTOS – NTSA Exposed For Flouting Traffic Rules Amid Public Uproar Over Accident Fatalities < Previous
Moses Kuria: “Why The Ballooning Wage Bill is the Dialogue Kenya Needs” Next >
Recommended stories you may like: