Watch: Heart-Wrenching Moment When School Children Were Caught in Middle of Kawangware Chaos 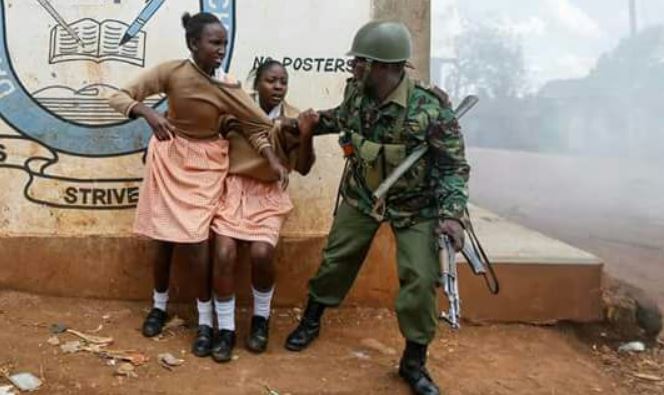 Footage has emerged on social media showing the moment school going children were caught in the middle of running battles between the police and rowdy youth in Nairobi’s Kawangware area.

The one-minute clip, aired by American television station ABC News, shows the heart wrecking moment when pupils of Gatina Primary School in Kawangware were heading home after rehearsals for this year’s KCPE examination.

Matiang’i had visited the school to supervise the rehearsals. After the CS had finished addressing the candidates, youth who camped at the institution’s gate began chanting “Matiang’i must go”.

They blocked roads and pelted stones before police arrived to contain the situation, using tear gas to disperse the youth.

The candidates who attempted to leave the school compound were unfortunately caught up in the melee, with some being rendered unconscious from the teargas.

It took the intervention of foreign journalists and some anti-riot officers to rescue the kids from the chaos.

Loading...
Cause of Bishop Korir’s Death Revealed < Previous
This is What Has Happened to the IEBC Officer Who Awarded Uhuru’s 440 Votes to Japheth Kaluyu Next >
Recommended stories you may like: