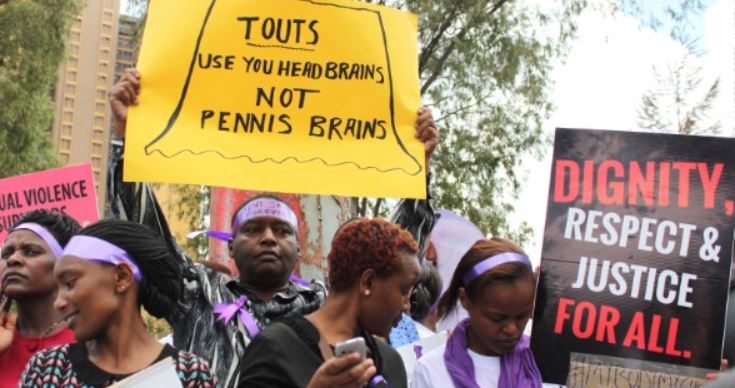 Since last week Thursday, Kenyan Twitter has been caught up in a discussion about cases of harassment against women. This is after a Kenyan on Twitter set the precedence with allegations that actor Nick Mutuma sexually harassed his girlfriend.

The Kenyan on Twitter, @KoomeGitobu, claimed that the actor groped and tried to force himself on his unwilling girlfriend at the Ameru Festival in 2016. 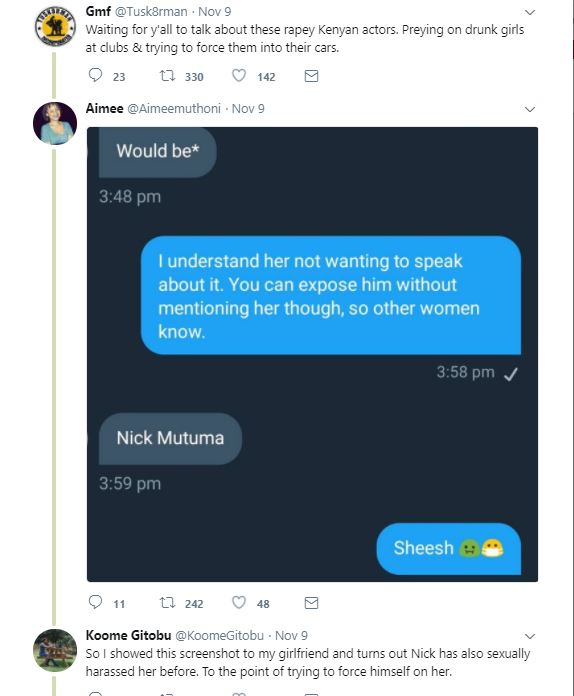 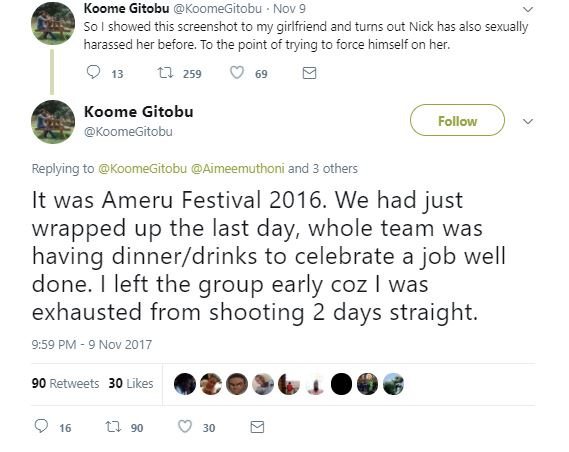 The actor has since denied the allegations, saying: “I entirely deny the story that is currently circulating about me. I’m extremely distressed that I’m being linked to this. I am passionate about creating an environment where women feel – and are – safe and respected. I would like to speak to @koomegitobu and his gf directly.”

A similar allegation has also been leveled against Capital FM presenter Joe Muchiri. One @bintiM alleges that the Capital FM production manager groped her two years ago.

Following the reports of sexual harassment, a tweet by one @_omalicha__, asking women to share the things they would if harassment didn’t exist, shed light on just how difficult day to day life for the Kenyan women can be.

Clearly, something drastic needs to be done to change this worrying and primitive social construct against our women.

Ladies, in a Utopian world, if harassment was nonexistent, what would you do that you cannot do now?
Me: taking walks at night.

Wear what I want to wear and jav. Usually take a cab when I do

I think moving around freely at night or in deserted, random spaces would be my favourite thing to do. ?

It just occurred to me how many of the things are about such basic restrictions. Clothes and freedom of movement. Hay God.

I’ve never understood why we just can’t be left alone?

Going out at night & sitting in a park watching life around me. Dressed in a dera & sandals.
Also, not having to think twice, thrice or 10 times about what clothes I’ll wear every single day.

sitting by the beach at night with you, smoking a zoot and laughing our heads off as we watch the waves WITHOUT having to have a man for “protection”

To be left alone. My response to your greeting isn’t an invitation to invade my space.

I don’t know where to start but not looking over my shoulder every time I’m walking alone would be a relief.

Also wearing shorts and short dresses whenever I please without being catcalled or grabbed would be nice.

I dream of this day, if not for me, for the future generations of young girls

Walk alone when I want.
Be in a place without immediately scanning the room for exits in case of an emergency.

Wear whatever I want, wherever
Take walks at night
Enjoy a solo meal or drink
Use a cab/uber any time of day
Say “no” without fear.

Not worry whether a particular route is safe enough, crowded enough or bright enough..

Relax my shoulders and enjoy the moment more. I realized whenever I am in a public place, my body is tense. As though I am always ready for an altercation.

Run during the night. I keep thinking it’s the best time cause it’s not too hot,not too crowded and the dust is not as much

Dance freely, without having to keep shooing men away/ Walk at night/ Ignore unsolicited male advances without risking my life/ Live fully?

Not having to endlessly notice the ratio of women to men in any space I occupy,intentionally or not, to know how safe I am.

Dance in a club with nobody touching my butt

1) Not have to plan for cab fare (or stockings) if I intend to wear something above the knee
2) Not get mini heart attacks when walking along deserted stretches
3) Not have to scan a jav before getting in
4) Not get anxious in a room full of men
5) Cat call free life!!

I want to be able to go to B Club & not witness the belly dancer get sexually harassed by Kenyan men. They jump into that tiny arena all wanting to touch her by force. She is obviously made to feel so uncomfortable. As in WTF!

• wear shorts/spags to the market.
• walk less tomboyishly around a guy group
• move at night alone
• engage on a serious/different topic without feeling unwanted personal comments coming
• no more “thank yous” to strange people on the street
• be left alone

Not have to ‘dress down’ because my figure ‘will distract the men’.

I wouldn’t struggle to keep my cleavage in sometimes.

Visiting a male friend without having to worry or alert all my village ancestors #justincase ?

short dresses /shorts
Walking at night
Going to a club and not worrying about some disgusting male groping me (this happened).

wear booty shorts with my ass checks showing at the bottom.

Be scared of applying for that Kajob because the male executives have some type of reputation.

Wear whatever I want and not be bothered by who’ll grope me!

Having to achieve something without someone reminding you that you are a woman and women shouldn’t ???

1.Not having to wear my wedding ring to avoid “unwanted advances”
2. Walking at night – got mugged once and then groping was more painful than what they stole