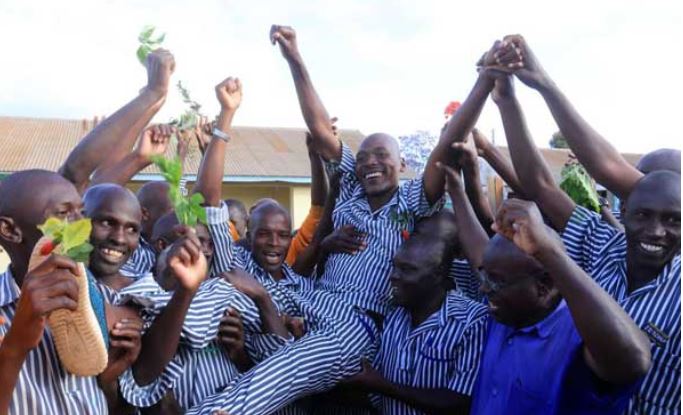 An inmate at the Kamiti Maximum Prison is one of over 9000 KCPE candidates who scored over 400 marks in the recently released examination results.

James Macharia Mwangi, 29, who is serving a jail term for causing death by dangerous driving, attained an impressive 413 marks out of a possible 500.

The overjoyed convict, who used to be a matatu driver, is set for release in 2019 when he hopes to further his studies.

“I’m very overjoyed. I’m so happy,” said the smiling inmate who dropped out of school at Standard Eight.

“I will continue [with] my education and I hope to study law once I’ve completed Form Four,” he said.

He attributed his success to hard work, discipline, and prayers.

His class, which had 15 candidates, recorded a mean score of 317 marks with six students scoring 350 marks and above.

Officer in charge of the prison, Ms Jane Kirii, said that since the correctional facility does not have provisions for secondary school education, the inmates who want to continue with their studies may have to be transferred to Nairobi West Prison.

She said the success recorded in the exams can be attributed to hard work from both the teachers and the students.

“I have seven teachers who help, some of whom are inmates and they worked very hard to produce this,” she said.

Dan Muchiri, a teacher who is also an inmate, said Mr Mwangi had been a model student all along and they had expected him to score more than 400 marks.

“We are extremely happy about this performance and we would like to see more inmates performing as well which is why we are praying that the government adds more classrooms,” he said.

Loading...
All The Trending Images in Nairobi This Thursday < Previous
OH MY! Jeff Koinange Visits 570 Year-Old Restaurant in Austria – PHOTOS Next >
Recommended stories you may like: