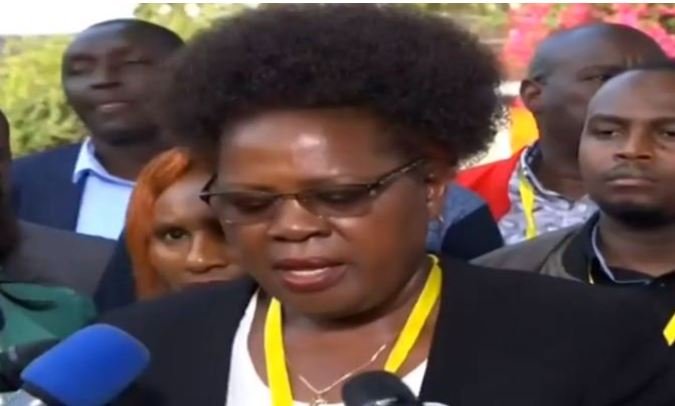 A video of the heated altercation between the MP and Martin Malonza was widely shared on social media.

Mrs Wahome said she confronted the returning officer for not giving the Jubilee Party a chance to verify the results. While Malonzo said the confrontation had nothing to do with the results, citing that the MP wanted him to change a statement he had written in Form 34B explaining why the Jubilee Party agent refused to sign the form.

The presiding officer at Kiiri Primary School has now been charged at a Kandara court with unlawfully awarding votes to Presidential candidate Japheth Kavinga Kaluyu.

John Kiguru Kamande is accused that on October 26 during the repeat presidential election, he entered 440 votes garnered by Mr Kenyatta as having been garnered by Mr Kavinga in Form 34A.

He appeared before the Senior Resident Magistrate Manuella Kinyanjui yesterday but he did not take plea since the court has not been gazetted to hear election petitions.

The case has been referred to the Murang’a law court where the suspect is expected to take plea today.

The case has been filed by the Independent Electoral and Boundaries Commission (IEBC) through Kandara Returning Officer Mr Martin Malonza.

Malonzo has also recorded a statement at Kandara police station accusing Mrs Wahome of harassing him while he was discharging his mandate.

The office of the Director of Public Prosecutions (DPP) has since ordered the immediate arrest of the MP and her subsequent prosecution but according to sources within the police department, the MP has not been arrested.

Loading...
Watch: Heart-Wrenching Moment When School Children Were Caught in Middle of Kawangware Chaos < Previous
The Hottest Stories on the Internet Today (Thursday November 2) Next >
Recommended stories you may like: