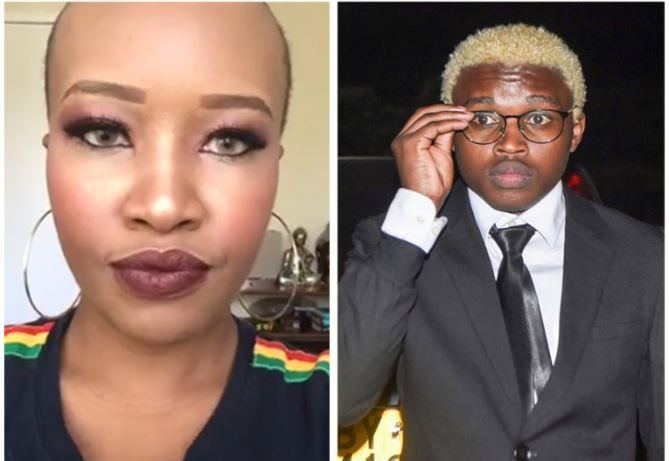 Over the last couple of days, you’ve likely been following the public spat pitting comedian Chipukeezy against Kenyan Hollywood based actress Christine Wawira.

The Hollywood beauty called out Chipukeezy on social media for lying about his meetup with his comedy idol, Kevin Hart. She accused Chipukeezy of failing to credit her for making it possible for the comedian to meet his American counterpart.

Chipukeezy has since apologized, taking to his Instagram page to post a message to the actress admitting his mistake for giving a wrong account of how things happened.

In his initial account, Chipukeezy had credited his meeting with Kevin Hart to an anonymous white woman.

But according to Christine, this is how things transpired.

“I was shocked when I heard him(Chipukeezy) say that he performed in Dallas. In his words, he said: ‘this white woman approached him and told him: ‘Oh My God, you are so good, I know Kevin Hart, if you wanna meet him, he is gonna be in L.A. tomorrow (June 6). So, you need to fly out there’. He said the white woman gave him her business card, and he, thereafter, flew to L.A.

“He made up this story, which said he messed up when booking a flight, and that he, nonetheless, showed up at the airport and he could not get in the flight; and that he told the flight attendant: ‘Oh, my name is Chipukeezy, and I am a Kenyan comedian; and I am going to meet Kevin Hart, I need to meet him.’ And he showed her some of his work on YouTube, and that she allowed him to hop on the plane.

“Chipukeezy further said that a passenger in the plane had to sacrifice her seat for him. That is a bunch of crap. No one, who followed necessary procedure in booking a flight, can be taken off the plane to give room to you, Chipukeezy!

“Another lie he said was that he did not have money for taxi and that when he arrived at the bookstore and his transport fee was 200 dollars (Ksh20, 100), he just told the cab driver: ‘I am Chipukeezy, a standup comedian from Kenya, and I don’t have money on me. I am here to meet Kevin Hart’. You want to tell me the cab driver was like: ‘Oh, it is okay, be blessed. Have a nice day’? No, that is not happening in Los Angeles; it doesn’t matter if you are Kevin Hart, Tom Cruise or Chipukeezy, or me. If you owe 100 dollars (Ksh10, 350) to a taxi driver, you are going to pay that 100 dollars, or it is going to be a problem.”

Well, Christine’s revelations have made Chipukeezy the subject of online trolling even from his fellow comedians, Njoro and Njugush.

Njugush, in particular, has posted a creative and hilarious skit based on Chipukeezy’s false story.

Loading...
PHOTOS – Jaguar Throws His Daughter a Birthday Bash Fitting for a Princess < Previous
Why Corruption Case Against Gladys Shollei Has Been Withdrawn Next >
Recommended stories you may like: