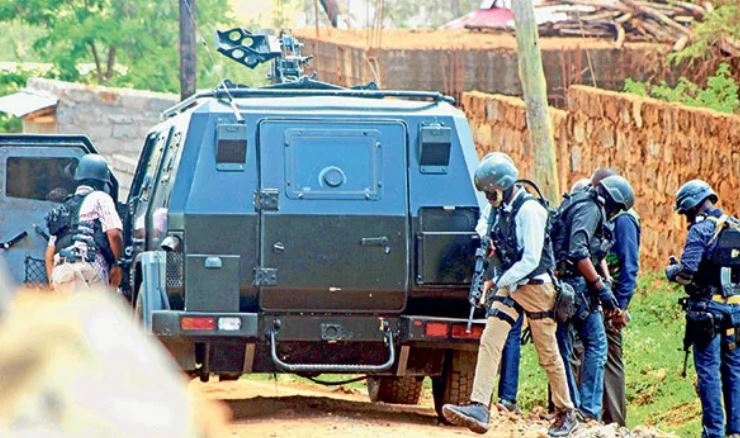 Three suspected robbers were on Saturday gunned down in a rental house in Kenol, Murang’a after a five-hour shootout.

During the shootout that brought business at the Kenol trading centre to a standstill, police recovered two firearms belonging to the Kenya Police Service – a Ceska pistol and an AK-47 rifle – and seven rounds of ammunition.

The pistol is believed to have been one of two that were stolen from two police officers who were shot dead in Nairobi’s Kayole estate after the ID of one of the slain officers was found with the suspects.

The AK-47, according to police, was the same one that was stolen from the two officers who were shot dead in Kibichoi in Kiambu County earlier.

According to police, the robbers had been on their watch list for several weeks and it was not until Saturday that they cornered them hiding in a six-storey building at Kenol suburbs at around 10 am.

“When they spotted the officers approaching, they opened fire from the top floor. This prevented the officers from accessing the building,” Murang’a County Commander Naomi Ichami said.

A shootout ensued and went on for five hours as the officers sought support from the Directorate of Criminal Investigations (DCI) officers.

Officers from the Flying Squad based in Murang’a were deployed to the area at around midday but could also not access the building as the criminals held a family hostage in one of the rooms.

“It took us a very long time (to fell them) since they had held a young family of a father, mother and their young child hostage and were using it as a human shield, making it difficult for us to shoot them dead,” said the police commander.

After a five-hour stand-off, officers from the highly trained General Service Unit’s Recce Squad from Ruaraka in Nairobi were dispatched.

It took them 15 minutes to end the siege that had proved difficult for over 70 officers.

The three robbers were shot dead and the family that had been held hostage rescued unharmed. County Commander said that they would be taken through counselling as they might have suffered shock from the incident.

The gang is believed to have been using the building as its hideout and armoury, taking advantage of the elevated floor to spot any officers approaching.

An amateur video footage of the Recce squad raiding the rental has emerged on social media.

Footage from the Kenol,Murang’a shootout as Recce members tactically closed in on the three thugs.Just 15 minutes is what was needed…. Video courtesy of https://www.facebook.com/kinuthia.kelvin #KaziTu #CrimeFreeZone #Kenya 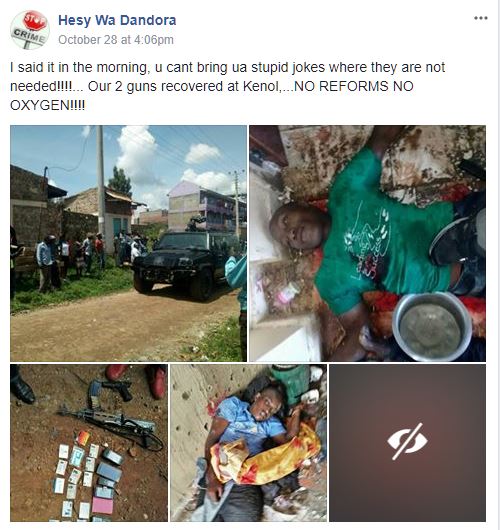 Loading...
Babu Owino: Why the BOMAS of Kenya Should Be Renamed BODMAS < Previous
Hilarious Meme Compilation (Tuesday October 31) Next >
Recommended stories you may like: