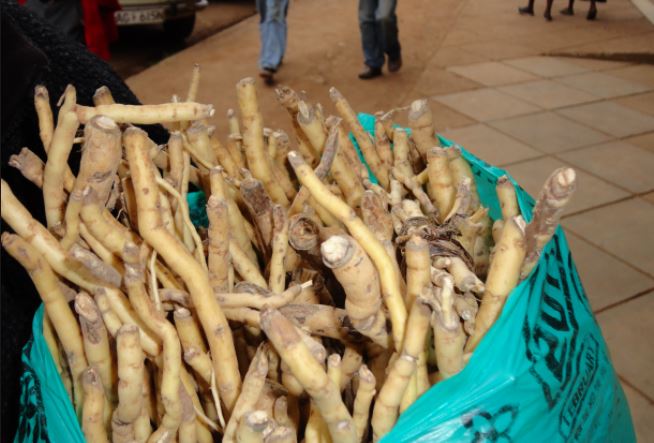 You’ve likely seen it being hawked on the streets and wondered if it actually lives up to its reputation. Or if you’re the more adventurous type, you’ve probably stopped your local ‘peddler’ and ordered yourself a stick or full bag, depending on your “shortcomings”.

It is popular as Mukombero and it is probably the reason why women in Western Kenya, where Mukombero is primarily found, are believed to be happier compared to their Central Kenya counterparts.

It was chewed out of Kenya’s central highlands years ago where it is known as muhukura and now it is almost extinct in its last home in Kakamega Forest.

The plant, which is scientifically known as Mondia Whytei, is mostly popular as a performance enhancement herb.

In addition to its sex-stimulating properties, the plant also treats a wide variety of illnesses including anorexia, bilharzia, indigestion, loss of appetite, stress, and others.

Its roots have a vanilla-like aroma which makes it suitable for making tea, spice, and fragrances.

Now, there is a juice. This will especially come as good news to the guys who face the same kind of anxiety while buying the plant as they do while buying condoms.

The Kenya Industrial Research & Development Institute(KIRDI) has developed it and it will soon be available at your local supermarket for Sh70 for a 300ml bottle.

The ready to drink juice will also have several varieties with KRDI planning to incorporate it into other fruit-based juices. They will also add flavouring compounds like lemon.

The juice has been one of the highlights of this year’s International Trade Fair.