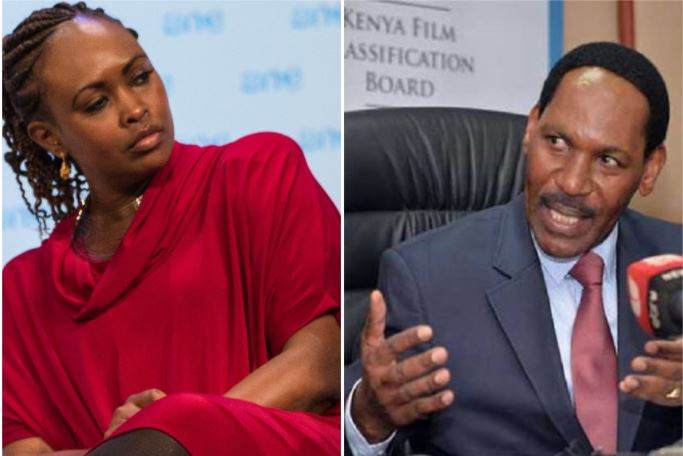 The ‘fight’ between media personality Caroline Mutoko and KFCB Boss Ezekiel Mutua has reached a new level of ugly. This after the ‘moral police’ accused Mutoko of corrupting moral values during her tenure at Kiss 100 FM.

The public spat between the two started last month when Caroline Mutoko took to her popular Youtube channel to bash the films regulatory agency. In her video, Mutoko claimed that corruption and poor policies on the part of KFCB was the reason why a short film based on the life of a Kenyan community organizer – Kennedy Odede was being shot in South Africa instead of Kenya.

“I do not understand how they will have to go all the way to south Africa, create a slum that is Kibera and create SHOFCO, find slum children, why would that happen? I will tell you why that would will happen, because apparently it is too expensive to shoot in Kenya, because we are all about the eating. There is no any other reason,” said Ms Mutoko.

Now, the fight has entered round two and it is quickly turning ugly, at least from Mutua’s side.

In a more recent video, Caroline Mutoko has taken Mr Mutua to task and challenged him to explain what KFCB and other bodies are doing to make Kenya a preferred destination for Hollywood filmmakers.

But Mutua has responded with a vile attack accusing Ms Mutoko of being an unprofessional journalist. In his response on Facebook, Mutua also included political analyst Mutahi Ngunyi as an “armchair journalist.”

“Our standards as Kenyans are so low that Caroline Mutoko and Mutahi Ngunyi are actually celebrated opinion shapers. Yet, theirs is pathetic, debilitating armchair journalism that adds zero value to the national development agenda. For now let me deal with Caroline and her weekly rantings about the film industry in Kenya. Please get some basics right madam: KFCB is the regulator of the film industry. KFC markets Kenya as a preferred filming destination. Chris Foot, of whom you speak with such adoration, is actually the one to respond to your questions about movies being taken away from Kenya. I will respond to the rest of the inaccuracies later, but it hurts to see a journalist of Mutoko’s calibre openly mislead the public. Well, there is a silver lining though: Ezekiel Mutua and KFCB have brought the film discourse to the fore. So much so that the failure of other institutions is blamed on us. We have stood our ground about the need to clean the airwaves and bring sanity back on our screens. People like Mutoko can’t be part of this crusade and they are out to sabotage it, through sideshows, because that’s how they made their money – by corrupting moral values of our society through obscene sex talk radio shows during the watershed period. There is so much I can say about Mutoko’s tenure at Kiss 100 and how she set the wrong agenda for obscenity and vulgarity on our airwaves, but the less said the better. Suffice it to say that the worst threat to media freedom is not Government; it’s unprofessional journalists who play god with their platforms to malign their subjects. Mutoko’s clips fall short of the basic tenets of journalism – accuracy, objectivity and fairness!”