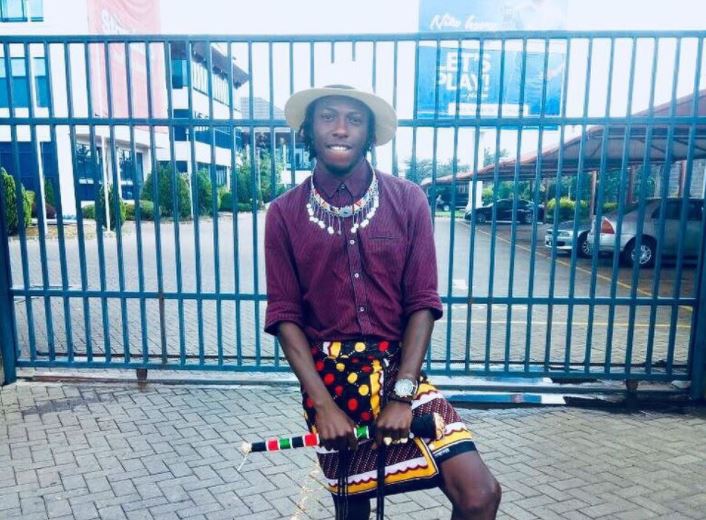 Mandela, who is a Jamhuri High School alumnus and activist, has begun his solo venture by releasing two singles ‘Fantastic Love’ and ‘Hakuna Matata.’

He spoke to Buzz about the split and his new journey.

Have you left Sarabi Band?

I haven’t left. But when you cannot lead people to believe in you, you lead yourself. We were children, then boys, then men and now we are fathers; some businesses have to be done. With new responsibilities come new revelations of working hard and expanding our brains to make more cents.

Do you know why you were given the name Nelson Mandela, and was that what drove you to be an activist?

My mother was my mentor; she was a leader and a warrior. She taught that if you could survive on anything then you can live with anyone; that’s how I came to understand people. She suffered domestic violence at the hands of my father. That taught me how to love women and listen to children. She passed on, when I was 10 and I started needing people for support. Eventually I became a family member to those who took care of me. You lead through being the best version of yourself, not trying to be like the late great Mandela.

When did you start feeling like music was your thing?

When my mum passed on. My first interest in music came from my people’s accent, they speak in octaves. And I wanted to know how to sing in other languages. I came to Nairobi to live with my brother in Mathare slums in 2000. I liked the fancy American acts like Usher Raymond and Michael Jackson. I took to dressing up in t-shirts, bandanas and one-leg-folded pants. We formed a hip hop group with Mugo and Gachigo Kajimbi called Wembe Kali in 2002. David Matheka, founder of Inspiration Centre, Mathare, helped my foundation as a singer.

The centre supported a lot of art activities for youth in the area. I lived with my other brother in Jericho Estate when I joined Jamhuri High School. We’d go to Legio Maria Church and I loved their singing sessions with the drum beats, clapping and feet stomping. God put me on a path I was destined for; all these inspired me.

Freedom; this means being allowed to be who you are. My message is being free with your speech and communicating with those of a different idea. I have faith that there’s a lot of love in people despite experiencing the worst in people.

What prompts the energy in your musical performances?

George Ndiritu who brought Sarabi together had us try different ideas and we settled on making the stage feel free for people to come up and dance. I need to do that now, business-wise.

Why a solo trajectory?

I suggested to my band that we should collaborate with other stronger artistes to break into their fan bases, but my band thought we can do it alone. I came to this decision when they didn’t support me in my previous collaborations with Jhiko Man and Vicky Manyika in the song Nice Place and lent my voice to Jux’s and Vanessa Mdee’s Juu. I recorded my EP at Wanene Entertainment, who have state-of-the-art equipment and software as well as genius producers, which Damien Sol had introduced me to. The cash for the production was from an investor friend of mine. I want to be at a level where I knock on any door, and when I say “It’s me” people know my voice.

How did you come to work with Jux and Vanessa?

I was with Tanzanian singer Damien Sol when we met Jux at a house studio where he was producing beats. Seeing me with my guitar he asked me to jam with him. Then he told me to work on a song with him because he liked my sound. Two weeks later he contacted me with a request to use the sample on Juu.

I have released two tracks Fantastic Love and Hakuna Matata to let people adjust and digest the new sound of Mandela which can be found on SoundCloud, then they can buy the six-track-EP on iTunes and other Tune Core distribution platforms.

Have you got into trouble with authorities for speaking up?

I got arrested while giving an interview when we did “Diaper Mentality” with Boniface Mwangi, Eric Wainaina and Reverend Timothy Njoya at Freedom Corner, Uhuru Park. Ironically, they were asking me what was happening as they put me in the vehicle.
Now I prefer to discuss these issues at home. I have a family and my career could end if I’m hurt on the streets. I voice my views on stage and in my music.

How is family life?

I have a son, who’s turning three, from my past relationship, and two step daughters with my girlfriend. It’s amazing to be a young father. It’s the adult’s responsibility to care for all children. When my son was born I moved to his mother’s house for two years so I could help her take care of him. We play a lot of football with the girls too. They laugh and make fun of me when we walk to the beach and I’m in my khanga and t-shirt, or when I dress up and we’re in the house. I do it for them. One girl likes reading; the other is into gymnastics while my son loves music.

Which is the best concert you’ve performed at?

Roskilde Festival in Denmark 2015. I got to see Nicki Minaj and Pharrell Williams performing live although we were far. It was five days of music and camping with 100,000-plus fans in an area the size of Nairobi CBD with different stages mapped out.

What is the craziest concert you’ve performed at?

Karibu Festival 2014 in Bagamoyo. That’s where I met my woman. She’s of mixed descent. It’s crazy because of how I met her, but let’s talk about that in five years.

Recently, I did an impromptu performance in Stone Town, Zanzibar, and video just to show people it’s also possible.

Why the wardrobe choice?

It provokes people to think and leaves a mark in people’s minds; it is simplicity, love (for self), beauty, cleanliness, clarity and pride. Let people speak about you, good or bad, it’s the only way others can confirm your existence.

Tell us about the rings you wear?

They are made from brass. The lion symbolises attitude, stand tall and strong. The African map symbolises my home and spiritual and mental nourishment. The five-rings-in-one is from Ethiopian culture symbolising wealth.

Did you know anyone before they were famous from Jamuhuri High School?
I was desk mates with Kevo Abbra, the designer.

I believe in God, and I pray.

I can’t float on water when stationary, but I can swim.

If my crew is okay, then I meditate in silence for an hour before going on stage. I also don’t like wearing shoes when performing.

Loading...
Moji Shortbabaa Speaks Up on Kelele Takatifu Break Up, Pursuing Comedy and Starting Radio/TV Show < Previous
CRAZY! These are the Funny Pics Going Viral on Social Media Next >
Recommended stories you may like: