Cate Gachara, the Mother of Three Who Advertised Herself for Marriage Speaks Up 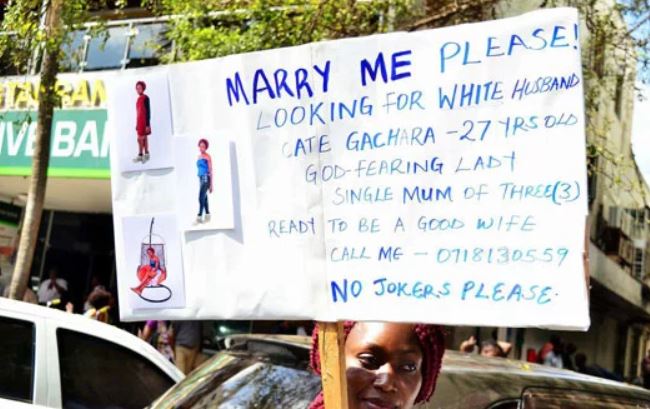 By now, you’ve likely seen the viral pictures of a desperate woman in search of a husband.

Ms Cate Gachara, became the talk of the town last week after she was spotted in Nairobi’s CBD hoisting a placard that read  ‘Marry Me Please.’

On the placard, Gachara listed her credentials and phone number for her prospective husband who must be white.

The 27-year-old single mother of three has opened up about her daring and bold search in an interview last Sunday.

She clarified that she is looking for any soulmate, but would be happier with a white man.

“I am born again. When I wrote the placard, I specifically wanted a white man, it was because I know Kenyans are jokers. A white man will always deliver their promises and help you out with your kids. It is not common for a white man to just leave you because he has slept with you,” Ms Gachara explained to Nairobi News. 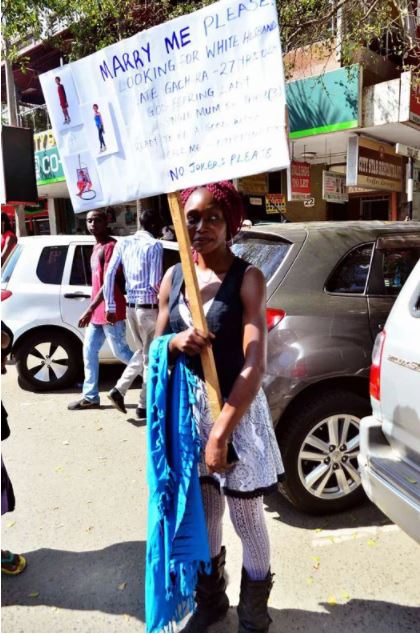 Gachara, who resides in Rongai, said she was forced to ‘advertise’ herself after her former boyfriend and father to two of her three kids abandoned her and married a ‘Mzungu’ lady in the USA.

“My former boyfriend went to school in India and I later heard that he relocated to the USA. I hear he is now living with a ‘Mzungu’ (white lady). When I speak to his parents, they only say they are willing to take care of the kids. But I am not comfortable with that arrangement,” she said.

Ms Gachara, who said that her Ugandan father and Kenyan mother are both deceased, added: “I am looking for a man who can love me and support my kids. Life has been very tough for me.”

She also claimed that since ‘advertising’ herself, her phone has not stopped ringing.