Boni Khalwale: “Uhuru and Raila Must Sit Down and Talk” 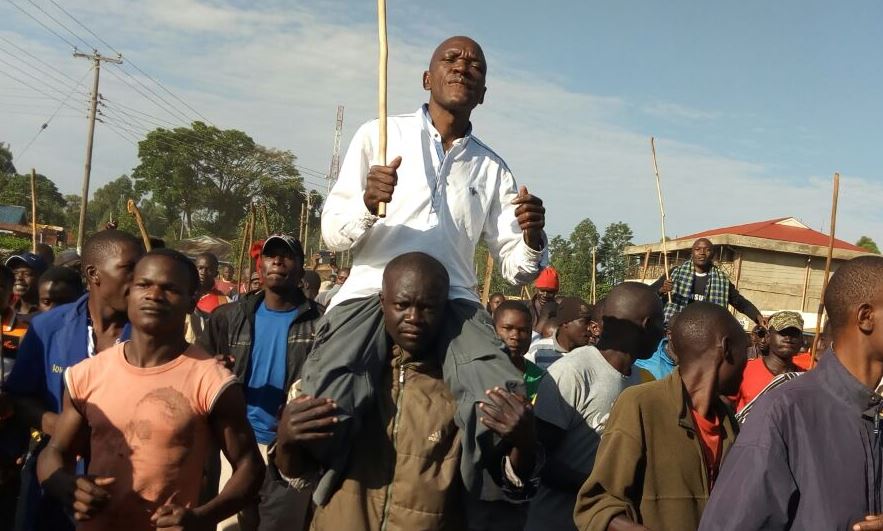 The country is divided politically. One side believes they won clean and their victory stolen by the Supreme Court. The other side says that the thieves were caught in the act and stopped.

When the Supreme Court made its ruling, it ordered IEBC to conduct a fresh election within 60 days. The date was set but Nasa has refused to participate in the election until their ‘irreducible minimums’ are met. Among them is the resignation of certain individuals led by CEO Ezra Chiloba. The Supreme Court never found any single individual culpable, which has led Jubilee to believe that Nasa is simply looking for excuses to stop an election and force a ‘nusu mkate’ government.

Though Nasa has repeatedly denied any intention for a coalition government, what is no longer in doubt is that they are not interested in an election. They have stated many times that there will be no election on 26th, but have failed to reveal how they will make this happen.

Nasa has showed interest in talking with Jubilee, even decrying Jubilee’s failure to turn up at IEBC round-table meetings.

But Jubilee has said many times that they have nothing to discuss with Nasa. Deputy President William Ruto is on record stating that it is Nasa which has a problem with IEBC, and should therefore stop ‘tagging’ Jubilee in their squabbles. Together with the President, they have repeated categorically that there will be no nusu mkate arrangement.

But former Kakamega Senator Boni Khalwale, who has in recent days taken a key role in Nasa campaigns, thinks the two sides must sit down and talk.

Writing on Twitter, Khalwale said that neither side is prepared to back down on their pronouncements and therefore the only solution is a dialogue. He cited Nasa’s ‘No Reforms No Election’ campaign and Jubilee’s Election Law Amendments.

It is unclear what kind of talks Khalwale has in mind, but such talk is usually immediately interpreted to mean ‘nusu mkate’. And indeed, he was quickly dismissed by nominated MP Cecily Mbarire. 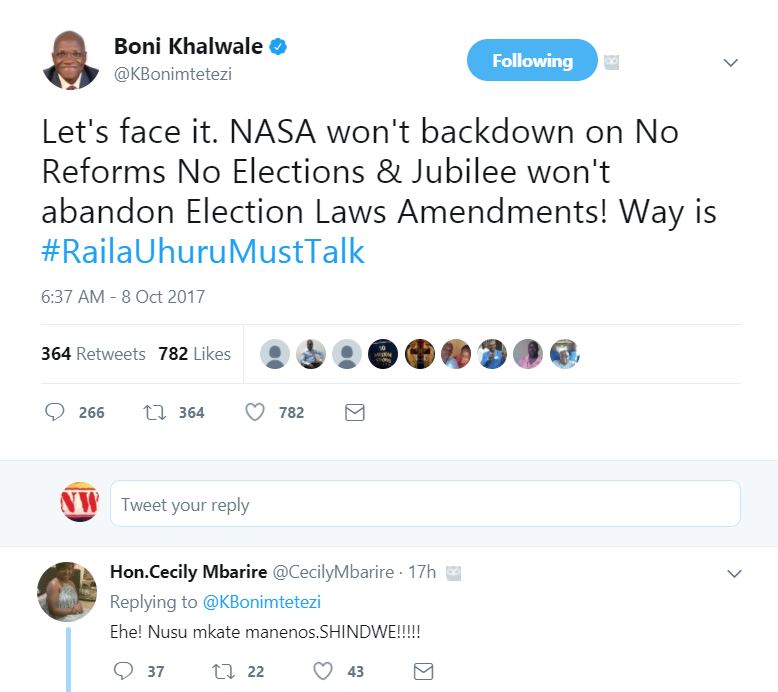 As October 26th approaches, it will be interesting to see whether Nasa actually delivers on their promise to supporters that there will be no election. At the moment, IEBC insists the election is on schedule, and Jubilee is changing the law to ensure Raila participates failure to which Uhuru is elected unopposed.

I don’t want to be a pessimist, but I do not foresee any talks before October 26th. Jubilee in particular has shown zero interest of sitting on the same table as Nasa.

Loading...
Down But Not Out: Massive Re-stocking at Nakumatt Junction (PHOTOS) < Previous
Moha Jicho Pevu: I Have Not Defected To Jubilee… Yet Next >
Recommended stories you may like: