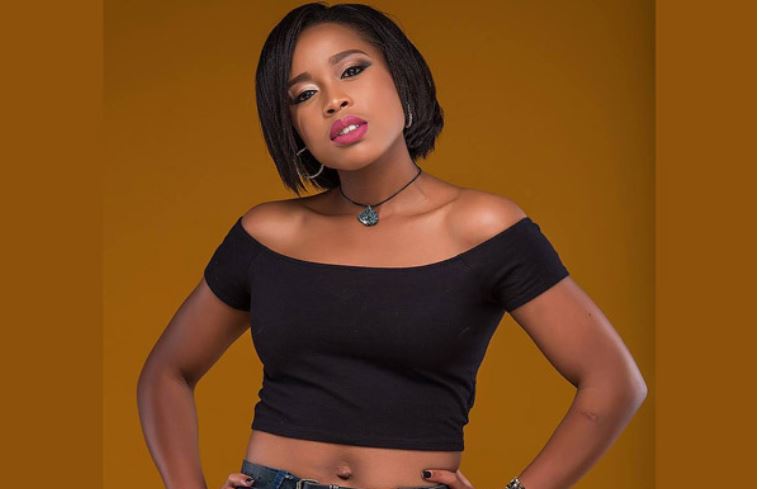 Rosalie Akinyi, better known by her stage name Rosa, is undergoing a transformation in the type of music she does. After four years in the industry trying out different styles, she has now settled into the Kenyan pop genre, that has a lot of dancehall inspiration in it.

The 23-year-old has been signed to Flag42 after going through three producers in the year she debuted.

Her hit -Mchezo ni Kwako – released in July and its subsequent remix with 125 released in September introduced this new phase to her fans after taking time out to discover her strongest expression.

Here are 15 things you probably did not know about Rosa:

When did you start your love with music?

I started singing when I joined the choir in form one singing as either a soprano one or alto. During the holidays I’d sing covers of Emeli Sande, Ed Sheeran Adelle, basically any song I liked, and upload them to YouTube. The response I got was that I should try out as a recording artiste.

At what point did you take the step to try professional recording?

Just before I joined university, in December 2012, a producer watched one of the videos on my channel and left his contacts on the comments. We managed to meet up way later in 2013, and a week after that I was at his studio to record. Funny thing is, another producer approached me and asked if I could curtain raise for Burna Boy at Carnivore during Naija Night that October. Immediately I got off of stage after that performance someone from Flag42 approached me and began talking about signing me up.

How was it being on that stage?

It was the first time I was alone on stage. I was so nervous, the first person up there that night, singing both the Kenyan and Nigerian national anthems. I messed up halfway into the second verse of the Nigerian anthem and just repeated what I had sang in the first verse. Most people didn’t notice, they were just blown away that I could sing in Nigerian. That boosted my confidence.

Did you get formal musical training after starting to record?

Flag42 have a coach who has been giving me a bit of training before my recording sessions, to correct my vocal skills. Thanks to them I also have dance and choreography training to make me perfect for on-stage and video; I was very good before (laughs).

Why the re-launch now?

I’ve just recently embraced dancehall, starting with “Mchezo Ni kwako”, because it’s something I listen to all the time and it’s true to me. My album has Trap, Chakacha, and full-on pop songs in English songs. Most of them didn’t work although feedback is that “Zungusha”, Chakacha inspired, is my best song so far but it’s not what I would use to define my style. “Mchezo Ni Kwako” is my first release this year following this direction.

How are things so far?

It’s been exciting, knowing that I now have some direction of where I’m going, even though it’s not the last stop. I know there’s different ways I can use dancehall to create my own style. I’ll definitely continue growing and my voice might also keep changing.

What has been your experience of the music industry?

I think it’s difficult for everyone as long as you’re not reaping as much as the effort you put in. The thing that makes me want to do it so much despite the difficulty – knowing how to deal with people, what not to do in some situations – is because I love it. I’m willing to slowly learn the experience needed to manoeuvre. Mostly the problem has been within me. People will listen to a good song, but if you don’t know the direction you want to take as an artiste then it becomes a problem. People kept asking me what defines Rosa and I was constantly checking what works and what doesn’t.

There’s a singing promotional advert I did for DSTV for social media, and these kinds of endeavours raise my standing and the label’s. They may not be able to cater for all my musical expenses, but it gives them confidence to invest in me and I still make money from singing.

What should fans expect from Rosa?

More consistency in music releases, and more videos coming out.

What does Rosa love?

I eat most of the time. I love chicken, I would eat anything with chicken in it regardless of how it’s made. I also love to work out. I do it every single day for an hour and a half with weights.

What can you boast as your workout achievement?

I can do squats with 100kg weight on me.

What do you do for leisure?

I spend a lot of time indoors, either watching television (any show with cops or prisons) or researching on stuff. I once wanted to be a cop when I grow up.

What did you end up doing?

I have a Bachelor of Commerce in marketing from Strathmore University.

If I’m not in the house I’m always driving somewhere. I will not show up to a barbecue or go for swimming, but I’m always down for a road trip.

Staying in clubs for too long. I don’t know how people spend the whole night in a club. Guys who can do it have special powers, I feel like it messes my whole week up. Even when I’m performing, two hours is good enough for me.

What can’t you do?

There’s a lot of things I feel I can do, when it comes to entertainment, but I can’t act. I will always find something to laugh about when I have to dramatise something. That’s spoiled my chances of being an actress.

Loading...
Greece-Based Kenyan Actress Lizz Njagah Speaks on Returning to Kenya, Family, and Upcoming Film Projects < Previous
9 Things You Did Not Know About ‘Jela 5-Star’ Actor Bilali Wanjau Next >
Recommended stories you may like: