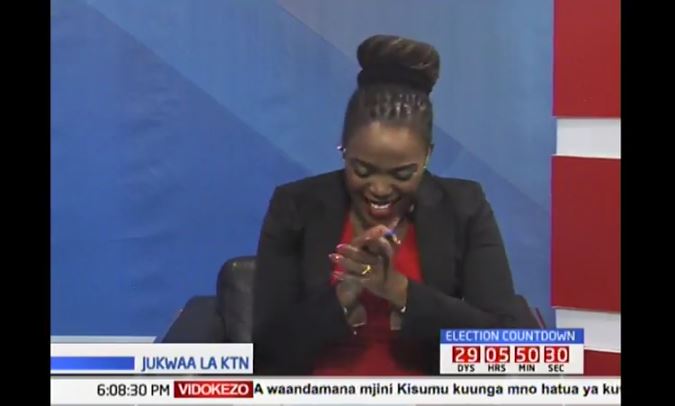 KTN Swahili news anchor Zubeida Koome found herself between a rock and a hard place when she was unable to put on a straight face during a live broadcast.

The news presenter, who hosts Jukwaa La KTN every Monday to Friday from 6 pm, got the giggles and could not stop laughing while hosting a live broadcast on Tuesday evening.

In an 8-minute video that is becoming everyone’s favorite, Zubeida starts the broadcast with a news recap of the day’s events. She then continues to introduce her guest before presenting the news.

On Tuesday, the main story was, of course, NASA’s ‘sheesha Tuesday’ and this appears to have been Zubeida’s catalyst.

After airing a video of NASA demonstrators giving their views on why they want the IEBC CEO Ezra Chiloba to resign, Zubeida burst into uncontrollable giggles.

The broadcast was momentarily stopped to allow Zubeida to compose herself but it did not help much. When she resumed presenting the news, another bout of laughter hit her.

Loading...
All The Trending Images This Thursday < Previous
Why Court Has Awarded Jaguar’s Father Sh 672,000 in Damages Next >
Recommended stories you may like: