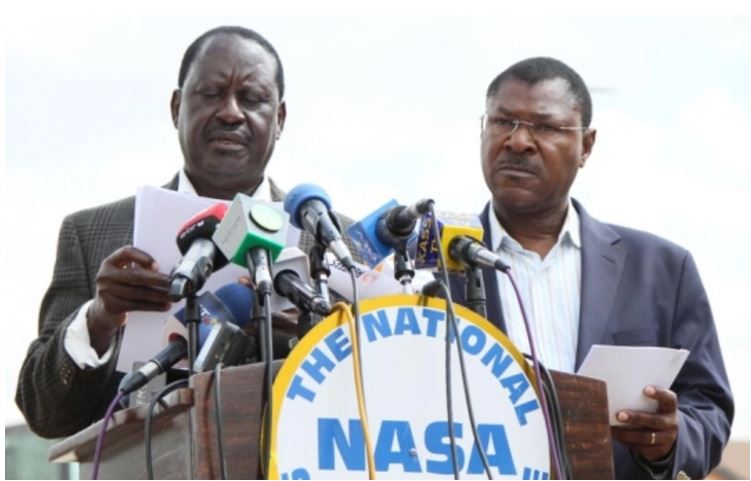 The World Health Organization and UNICEF, have issued a statement in response to Raila’s allegations that the tetanus vaccine in Kenya has a sterility hormone.

In a press conference yesterday, the National Super Alliance (NASA) leader accused the government of deliberately sterilizing thousands of women and girls between 14 and 49 years old using the vaccine.

Raila, who was addressing the press from Capitol Hill, said laboratory tests from various hospitals showed the vaccine had traces of a hormone that would render the recipients infertile.

“The Catholic Church was right. Hundreds of our girls aged between 14 and 49 years old will not have children because of the state sponsored sterilization project that was sold to the state as tetanus vaccination,” said Raila.

He said this conviction was arrived at after assessing analysis from Agri Q Quest, Nairobi Hospital, University of Nairobi and Lancet Kenya, and “the results indicate that the vaccine had a high content of Better human chorionic gonadotropin hormone (hCG) that causes sterility in women.”

He described the vaccination a ‘human rights abuse’ and asked the government to publish a full list those who were involved in the process.

But WHO and UNICEF, through their Kenyan representatives, have said in a statement: “These grave allegations are not backed up by evidence, and risk negatively impacting national immunization programmes for children and women.”

“WHO and UNICEF confirm that the vaccines are safe and are procured from a pre-qualified manufacturer. This safety is assured through a three-pronged global testing system and the vaccine has reached more than 130 million women with at least two doses of TT vaccines in 52 countries,” reads the statement in part.

Statement from WHO and UNICEF on the Tetanus Vaccine in Kenya

The World Health Organization (WHO) and the United Nations Children’s Fund (UNICEF) express their deep concern about the misinformation circulating in the media on the quality of the Tetanus Toxoid (TT) Vaccine in Kenya.

The allegations are that the tetanus vaccine used by the Government of Kenya and UN agencies is contaminated with a hormone (hCG) that can cause miscarriages and render some women sterile. These grave allegations are not backed up by evidence, and risk negatively impacting national immunization programmes for children and women.

Human chorionic gonadotropin (hCG) is a hormone produced by the placenta, during pregnancy. hCG is also produced in the pituitary glands of males and females of all ages. However, very high levels pose risks to pregnancy.

We have taken note of test results claiming to show levels of hCG in samples submitted to some clinical laboratories. However it is important to note that testing for the content of a medicine, e.g TT Vaccine needs to be done in a suitable laboratory, and from a sample of the actual medicine/vaccine obtained from an unopened pack and not a blood sample. Furthermore the Pharmacy and Poisons Board – the legally mandated National Regulatory Authority has the capacity and mandate to determine the quality, safety and efficacy of medicines and to advise the Government accordingly.

WHO and UNICEF confirm that the vaccines are safe and are procured from a pre-qualified manufacturer. This safety is assured through a three-pronged global testing system and the vaccine has reached more than 130 million women with at least two doses of TT vaccines in 52 countries.

Given most tetanus cases in Kenya are among newborns, the target group of Kenya’s TT vaccination campaigns is girls and women (15-49 years), with a particular emphasis on those in the most marginalized areas. We note with concern that Kenya is one of the 25 countries where tetanus is still a public health problem, killing hundreds of newborns every year.WHO and UNICEF reiterate our readiness to support the Government of Kenya in its efforts to provide safe and quality assured vaccines for the immunization programmes.

Loading...
Nairobi County to Deploy Sh8 Million Drones to Monitor Payment of Parking Fees < Previous
Chebukati Rubbishes Allegations of Night Meetings With Nasa Next >
Recommended stories you may like: