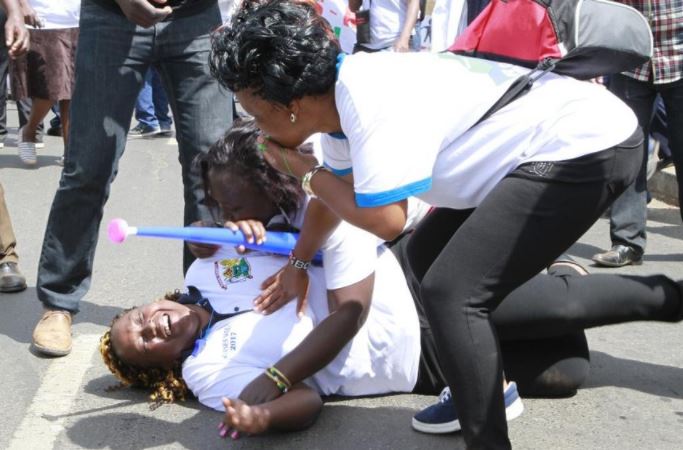 County governemmnts have issued striking nurses with a seven-day ultimatum to return to work or face sacking.

Following a consultative meeting held yesterday, the Council of Governors described the industrial action as illegal. The County bosses said they will not hesitate to hire new personel on a contract basis if the current group defies the directive.

The caregivers are required to resume work by September 8.

The more than 25,000 health workers have paralysed services at public hospitals for 89 days now. They are demanding the recognition of their collective bargaining agreement (CBA).

But Council of Governors Chair Joseph Nanok said the draft CBA is unrealistic and called on the Salaries and Remuneration to carry out a re-evaluation on which new terms can be negotiated.

“From the consultations amongst county governments and the Salaries and Remunerations Commission (SRC), the Collective Bargaining Agreement (CBA) as demanded by nurses cannot be implemented in its current form.”

“The nurses’ strike is illegal. It is notable that the nurses went on strike while the negotiations on their CBA were taking place. This was an act of bad faith,” stated the Turkana County Governor.

He  assured the nurses who return to work before the set deadline will face no victimisation.

“There will be no victimisation of the nurses who participated in the strike, counties will withdraw all show cause letters issued before this date, counties will pay all unpaid salaries,” said Nanok.

“Payment of salaries to the striking nurses will be stopped immediately.”

But Maurice Opetu, Kenya National Union of Nurses acting Secretary General, said the strike will go on despite the threats.

“The Council of Governors has no mandate to declare our strike illegal. They have always been very dishonest in all our discussions,” he said.

“Today’s stance will also hurt progress made in the talks so far. Our strike will be energised.”

The CBA, which will cost taxpayers Sh40.3 billion if implemented, was presented by governors to the Salaries and Remuneration Commission (SRC) in June.

The SRC dismissed the Sh20,000 the nurses sought as a health risk allowance and proposed the figure be reduced to Sh5,000.

Loading...
Larry Asego Resigns from Classic 105 After a Decade for Embassy Job < Previous
Malawian National Charged with Terrorism for Taking Pictures of SGR Terminus Next >
Recommended stories you may like: