Police Imposter Shot Dead While on Robbing Spree in Nairobi 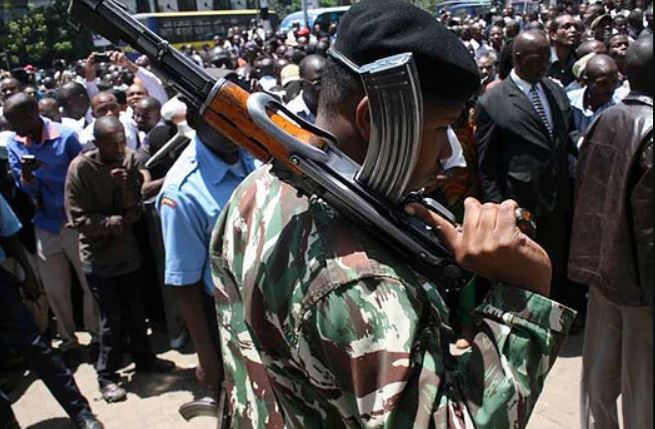 A fake policeman was yesterday shot dead after he was caught robbing members of the public in Shaurimoyo, Nairobi.

The police imposter was dressed in a jungle green police sweater, police boots, and a handcuff porch. He was gunned down by police officers who were on patrol at 5.30am.

“They responded and came into contact with the three and upon challenging them, they fired at the officers who responded and fatally injured one unknown male adult,” Mr Maiyek said.

The officers recovered a homemade pistol, pocket phone, a phone, a tablet, and an imitation of Administration Police Service certificate.

The shooting comes a day after Kenya Revenue Authority officials and the Directorate of Criminal Investigations arrested a man found with three corporate staff identity cards.

The man, Gordwins Agutu was arrested at Kiboro School in Kayole Division, after members of the public he allegedly duped pounced on him.

He was found with a Kenya Police Service identity card, which showed that he worked for the Criminal Investigations Department, a Kenya Revenue Authority Staff Card and another belonging to the Kenya Pharmacy and Poisons Board.

Loading...
Man, 21, Accuses Jubilee MP of Being a Deadbeat Dad, Moves to Court < Previous
Hilarious Meme Compilation (Friday September 29) Next >
Recommended stories you may like: