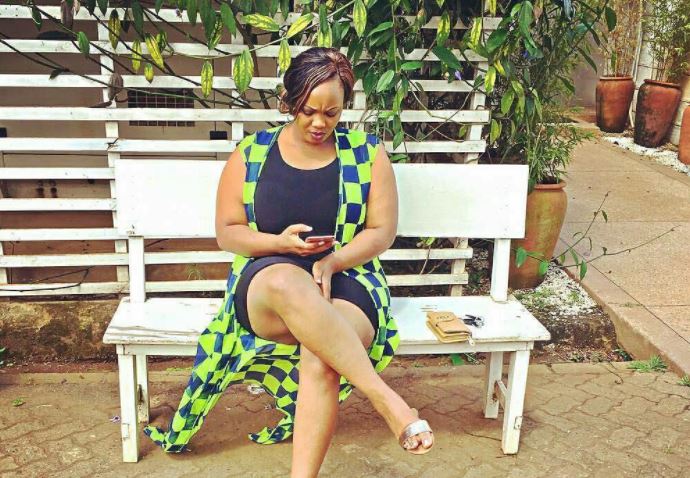 With 12 years in the entertainment industry, Neomi Nganga is one of the most versatile personalities in the country. She has worked as a radio presenter, an actress, a plus size model, and fashion designer.

In addition to that, she has been on the forefront helping plus-sized women fight stigma with the Team Curvy movement.

She spoke to Buzz about her career, business, and plans to launch a new reality show about curvy women.

I’m an actress, a model and I have a clothing line called ‘Style by Neomi’. I started a movement for curvy women (Team Curvy) and people would ask where I get my clothes, where I shop and how I manage to dress sexy. That’s where the interest stemmed from. Before that, it was a hustle for me to get clothes that fit, a lot of plus size sections couldn’t match my styles and any stores that carried plus sizes were maternity wear. If I ordered online some stuff wouldn’t fit the way I wanted. So I saw the gap in the market and thought, why not be the one to fill it? I have friends in the fashion industry like Wambui Mukenyi so I had a bit of information to go in with. I love dressing well and looking good.

It’s never easy starting anything, so it has to be about you and what you want. It’s always good to start something you’re passionate about because it gives you patience. Challenges are part of the successful journey, you can never avoid them. I had a few challenges, some thought I was all talk, or that I would start the business and not see it through. I had to look for people with the right skills, look for fabrics, know where to source them and the tailors were a headache to work with. You know Kenyan fundis… ‘Style by Neomi’ is not going to die because one tailor decided not to show up for work. Challenges make you learn. I’ve been involved in the business from scratch, when I started, I only had one tailor. I would design and give the tailor to sew it. From the needles, threads all the way to the fabrics, I would go to River Road to source for everything, I did the legwork.

There’s nothing like instant gratification, you will totally fail with that mindset. Never go into business with assumptions, if you see someone you like on Instagram ask them how they started, ask about the challenges so that when you start, you know what to do. Copying and pasting isn’t the solution, it won’t work because that is not your vision… Learn and research.

Acting and fashion complement each other very well. You need to dress well, people need to look good and I can make that happen. People need clothes in advertising and I make them. I’ve dressed so many people; Avril, DJ Crème, Slimpossible (TV show), Catherine Mwangi, Chris Kirwa… I can’t remember all of them. I have an artistic career.

I wear my own collection because I am my own marketer and model. I only wear other people’s lines when it comes to sportswear.

I left radio because I felt it was time. I was at One FM; they even called me the other day to ask if I could come back. I’m happy doing my own thing, getting satisfaction from my own sweat.

I have been in the entertainment industry for about 12 years. It has not been easy. I did so many auditions. You have to go through that till you land that one role that opens doors for you and you have to deliver so that people can start approaching you for more jobs. Be patient, be aggressive, the acting industry is flooded and there are great actors out there. But once you get your foot in the door, it becomes a bit easier, then you don’t have to keep auditioning because people know what you can do.

The hardest role to get was Shattered, the movie I did with Rita Dominic. They wanted me to play the part of a 65-year-old; I was 24 then, with my baby face. The director liked my body for the part but for my face… he didn’t see it working and kept saying ‘she looks like a baby…’ But I fought for it. I suggested we do make-up, I even offered to come with my own wigs. I auditioned for the part about 10 times until I landed the role. They had to use heavy make up to make me look 65.

I started hustling when I was younger. I matured a long time ago, so I don’t think there will be anything new but I will celebrate for what I have achieved so far. I will fly to a foreign country solo and just have some me-time, that’s what I want.

I consider Janet Mbugua and Julie Gichuru as some of the strongest and powerful women in Kenya. I love those two women, they have packaged themselves well. I love Gichuru’s brand, I think her brand is here to stay for a long time.

I once went for a checkup and the doctor told me I’m obese. The doctor advised a change of lifestyle, and I lost about 28 kilogrammes. But then I slacked, I regained the weight. But I’m working out again.

People have this perception that plus size women have let themselves go. It is a perception that I want to change through my platforms. I have another cause called ‘You Come First’. There are women who don’t know what to do with their plus size bodies, like how to dress. A curvy woman is a sexy woman.

I grew up in Huruma, in the ghetto. I went to Sunflower Primary School. I had an interesting childhood but life wasn’t easy. So many of my classmates dropped out but I managed to finish school. Life in the ghetto is hard, and I vowed never to go back.

We will do a reality show for Team Curvy; you are going to see what women go through from dating to their sex lives. I’m also working on my YouTube channel, so watch out for that.

Do women really support other women… not even 50 per cent. There are fake people in this industry; some will act like they support you but deep down they are waiting for your down fall. I have issues trusting people because of that. Others only support you to get traction for themselves.

I don’t like putting my private life on social media, but the day I’ll get married, everyone will know. I don’t want to be that girl who starts posting quotes after heartbreaks like ‘I’m better than… I deserve this and that’. I don’t think people should expose their relationships on social media. It’s hard making decisions in private, and because of social media you end up making them based on people’s opinions. Some brave bad relationships because they don’t want to look like they have failed.

Loading...
Former Video Vixen and Dancer ‘Toxic’ Set to Wed Mzungu Lover in the UK < Previous
Meet the Eldoret Man Who Gets Attacked by Demons When He Sleeps Without a Woman Next >
Recommended stories you may like:

What’s Trending in Nairobi This Tuesday
Loading...
The Latest