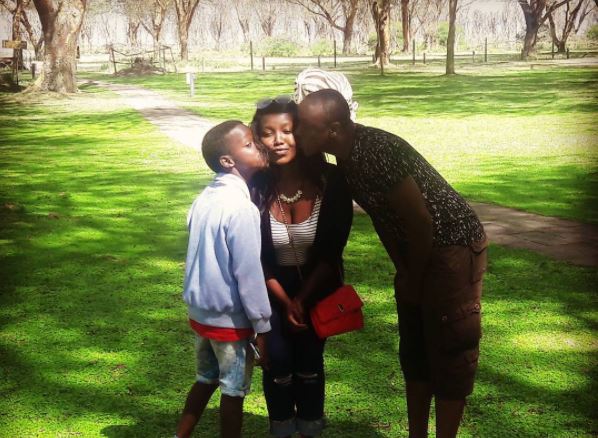 Few men find it hard to accept another man’s child as their own but not media personality Philip Karanja.

The former Tahidi High actor recently got engaged to Catherine Kamau. The former mother-in-law actress happens to have a son, Leon, with another man and Phil is happy to be part of his life.

He opened up about their relationship and how he had to earn the title Dad after three years.

What was your reaction when you realised that Catherine Kamau had a child?

We were friends before, so from the onset, I knew what I was getting myself into.

How was your relationship with the child in the beginning?

(Laughs). We were both fighting for the attention of the most important woman in our lives. Truth Is, it’s a relationship that you build day by day.

How hard was it accepting another man’s child?

I personally have never had an issue with adopting a child. Even when I was young, I would often say I will adopt children when I am older. I guess it boils down to one’s personality.

How is the relationship with the child now?

We are like brothers now. Our bond is so strong nowadays the mum gets jealous at times. Though I keep stressing that I am not his friend first, I am his father and teacher first.

How is your relationship with the child’s biological father?

He is not active in his life.

What name does the child use to refer to you?

Dad. But it was not automatic. I had to earn the title. For about three years, he used to call me by my first name, then he changed and started calling me dad. I am yet to ask him what

changed. I guess I scored major points somewhere along the line.

Has your family accepted the situation?

Yes, they have. We were actually shocked how much he bonded with my family.

What would you advise men in a similar situation?

Weigh very carefully if it’s a situation you are ready for, because it’s a lifetime commitment. It’s a big responsibility and before you ruin an innocent child’s life, think long and hard if you are ready for it.

Being a father is so far my greatest achievement in life….my sons success will be my legacy, my greatest achievement overall, and with you bae @kate_actress by my side, I know everyday I get closer to perfection. I love you both to bits?? Ion thanks bae for the extra calories you ongezead me today?fathers day should be every weekend? Swipe for more pics

Loading...
“I Would Sleep Out in the Cold During Churchill Auditions” DJ Shiti Opens Up on Journey to the Top < Previous
Court of Appeal Upholds Suspect’s Death Sentence for Stealing Toothpaste, Toothbrush and Sh16 Next >
Recommended stories you may like: