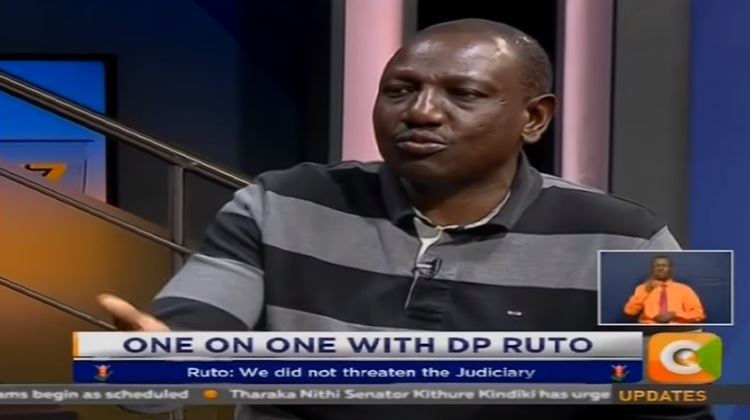 On Sunday night, Deputy President William Ruto was hosted by Hussein Mohamed on Sunday Live. This was his first TV interview since the August 8 election and the subsequent nullification of the same by the Supreme Court.

Coming at a time of great uncertainty about the election date and the fate of IEBC officials, there was a lot to discuss.

Ruto repeated their statements about the decision taken by the Supreme Court. He said that Maraga and the other judges were more interested in technicalities and not the will of the people.

On the ongoing IEBC infighting, Ruto said that Chebukati seems to be getting instructions from Nasa. He cited the leaked internal memo from Chebukati to Chiloba, asking the CEO to explain 12 issues concerning the election.

Ruto said that the memo was leaked to sensationalize the matter, and was meant for ‘public consumption’ so as to raise doubt about the August 8th election. He further faulted the media for not following up to find out what Chiloba’s response was. He said that Chiloba and his team had already responded, and if Hussein Mohamed hosted him on his show, he would have an answer to each of the 12 questions.

Ruto then made a sensational claim that Chebukati has been holding night meetings with Nasa, supposedly to discuss matters election. He challenged Chebukati to come out and deny the claim if untrue.

And Chebukati did exactly that barely minutes after the interview. On Twitter, he wrote, “Rumors regarding my so called night meetings with NASA are baseless and reckless.”

Rumors regarding my so called night meetings with NASA are baseless and reckless.

In another statement yesterday, Chebukati asked Ruto to reveal the dates and venues of the so called night meetings. He added that he would not be derailed from his goal of providing Kenyans a free, fair and credible election.

Loading...
WHO and UNICEF Respond to Raila’s Allegations that Tetanus Vaccine in Kenya Makes Women Sterile < Previous
The Hottest Stories on the Internet Today (Wednesday September 13) Next >
Recommended stories you may like: