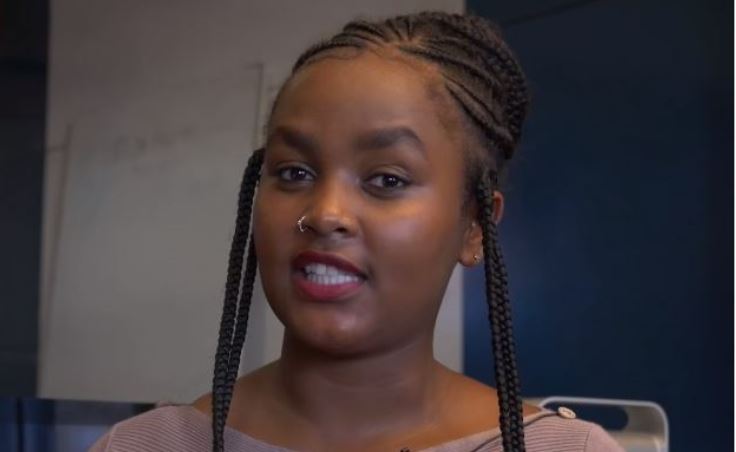 Catherine Wakio Munene, 20, is best known for her work in the comedy series ‘Jaymo Ule Msee.’

The actress, who prefers to go by the name Fortune, is the last born in a family of three children.

She was last week’s guest on Nairobi News’ Snappy 7 where she talked about her acting career, hustling, and more.

Believe it or not, I started when I was in standard three. I remember I was the smallest girl in my classroom but my voice was big. I attended several school plays and won several awards. I think the reason I’m doing it is because I have always been very passionate and eloquent in what I do.

Did it continue after your primary school?

Yes, it did. After I joined high school, both the two high schools which I joined were more focused on sports and they did not believe in drama clubs. It was not easy and the teachers wanted us to concentrate on our studies, but I kept nagging them until they gave in. We went on to win a few divisional awards.

Acting is number one. I am also a student at Kiriri Women’s University of Science and Technology were I’m studying Business Administration, majoring in procurement and marketing. I also have a small business that I ran here in the city.

What was your first professional role on screen?

I met a producer who was working at Jaymo Ule Msee brand for his show in 2015. He advised me to go there and fight for my place in this industry because there are many young people who want it.

I went and did a video clip called A Committee Meeting which went viral and my parents were not happy about it. I had just finished school and they were not amused about it, but I stood my ground and explained to them that this is what I wanted in my life. Now they are ok with what I do and are supporting me through it.

What character do you play in the show?

Since my first video went viral, I have remained as one of the main characters. The show is not scripted so normally the creative director tells us what to do in every episode and you have to be ready to change and get to your character every time.

Have you done anything else apart from Jaymo Ule Msee?

Yes I did two episodes of House Wives of Kawangware were I played a very old woman. But I want to finish school first before I can open my arms fully to the industry. So far I’m happy to be building my brand here.

Where do you see yourself in the next five years?

I want be a legend in this industry. I want young girls who want to be actors to one day say that I inspired them.