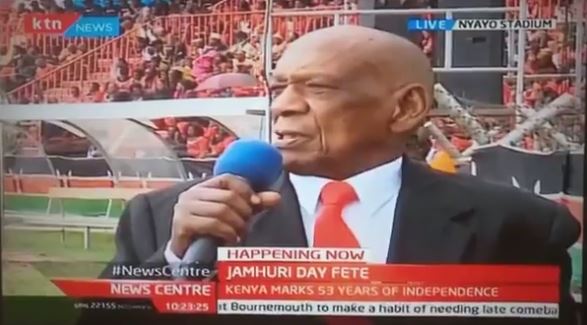 Some time back, we had a poll asking whether you support the introduction of the death penalty to deal with corrupt individuals. Over 80% of those who responded said Yes.

Read: POLL: Do You Support Introduction of the Death Penalty To Fight Corruption?

Readers of this blog are generally in their 20s and 30s, and therefore we may conclude that our poll results are skewed. However, if the words of one veteran are to be believed, the feeling is the same among other age demographics.

During the Jamhuri Day celebration at Nyayo Stadium, KTN interviewed a veteran on what is the biggest challenge in Kenya today.

“Maswala ile iko sasa kwa serikali yetu, ni ya ufisadi,” he said. He then went on to give suggestions on how to deal with this seed of corruption.

Loading...
All The Trending Images This Tuesday < Previous
Shameless Liar: Bishop Kiuna Posts Internet Photo as His Own Private Jet Next >
Recommended stories you may like: