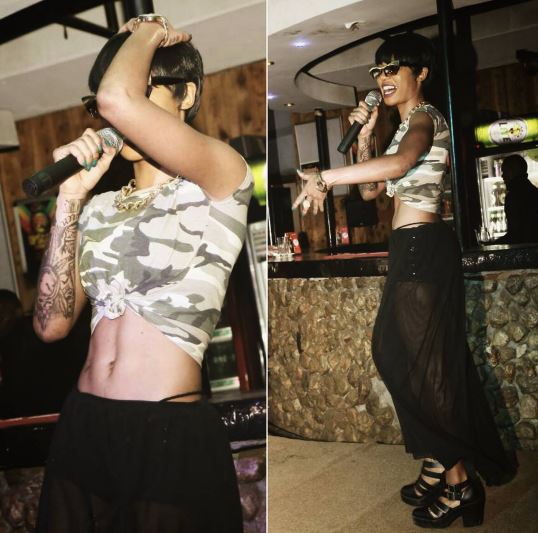 Another round of heated exchanges and diss tracks between Kenya’s femcees may be in the offing after rapper Noti Flow revived the beef over the weekend.

Taking to her social media, ‘The She Don’t Know’ rapper threw shade at her rivals, Femi One and Kyki Su describing the latter as a lazy drama queen.

On FemiOne, she claims the King Kaka empire femcee is her fan and that she has been playing Noti Flow’s diss track, ‘Forehead’, every day.

She also goes into detail on how she introduced Kyki Su to the rap game.

Femiplan really likes my diss track ? She has been playing it eerday. Don’t know if it’s to check how many views it gat or coz the track is dubbed #forehead ‘something she and her fellow empire mates gat’ ? Ooh well, she’s just a fan. ? Understandable. Am fuckin good at IT n Apps now btw ? Y’all bitches stalking me on my social media sites n shit.. Watching my YouTube videos and disliking them I see all of y’all. I know y’all. My Xs n Xs’ bitches too ? ??? Kyki Mwitu did the intro to my song & i still dissed that bitch on the same damn track ? Bitch come test me ?? Doing intro for Queen ?.. That’s more like it ?? I #queennoti came up with a plan.. As a young female rapper, I needed to support other upcoming female rappers by introducing them to the industry. By so I decided I was gonna get a few upcoming female rappers willing to work and prove a point in this industry.. I Put em together n we worked on a track dubbed #sisindiohao . It consisted of 6 young female rappers Kyki included. The track did pretty well.. Some airplay.. Recognition and interviews. The very first interview we got on 26th Dec 2015.. All the other femcees cooperated and came except for lil miss drama Kyki Mwitu who started fights n drama and even insulted the producer of Str8t Up show KTN. Lil bitch daent have etiquette nor courtesy nor understanding on how to live with people. We were supposed to perform the same song at Tribeca Mseto EA. Lil bitch was prolly looking for kuku mwitu to eat. She never came. Bitch daent evn know wat she want.. She’s lazy af. Bitch can’t even wash her hair. Then now she beefing.. ? Why tho? Lil bitch I washed u up, I cleaned you, I introduced you to the game, Bitch I made you famous! Well, not tht famous coz very few of u know her. But haingekuwa mimi your career ingekuwa kuuza kuku Mwitu na Chipo. Kwanza zile vichwa miguu, manyoya sijui.. Zile hutupwa kutoka chicken Inn. ? I rule your asses. Wen the Queen speaks u shut up. No wonder you said ‘yo mama never raised you’ ? Ud hv learnt how to Respect the bridges tht got you to the other end. Not burn them. Cz u might nid them.

Loading...
The Hottest Stories on the Internet Today (Monday December 19) < Previous
Boniface Mwangi Steps Down as PAWA254 Team Leader Next >
Recommended stories you may like: