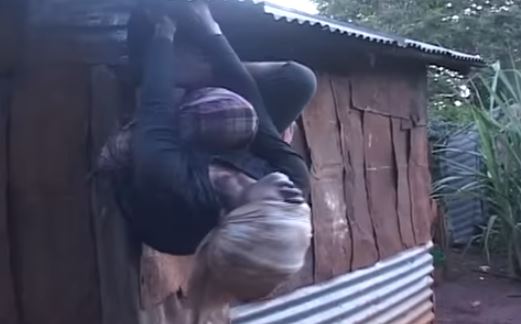 Residents of Ndikwe Village in Murang’a County were treated to a bizarre spectacle Wednesday morning as a self-proclaimed prophet, Johanah Gathua drove out demons from an 18 year-old girl and her sister.

According to family members the girl had been possessed by evil spirits for the last three months. The worst hit of the two sisters had even lost her ability to speak and at times made hissing sounds.

Locals gathered at the scene as the ‘prophet’ ordered the purported evil spirits to leave their captives. The sisters were caught on camera in chaotic scenes that have sent shockwaves across the country.

The sisters can be seen screaming, rolling on the ground, and in knee-jerk reactions to the prophet’s exorcism ritual.